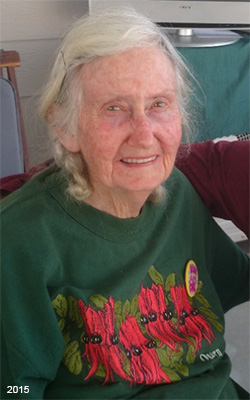 Kath Alcock of Naracoorte is one of the best known South Australian female orchid artists. She was born Kath Ridgeway at Bordertown S.A. in 1925 and attended the tiny Pine Hill school until grade seven. Kath remembers her parent's interest in the bush and its native orchids. Kath writes of these early days.... " In between jobs on the farm I explored the district north of Wolsely on horseback from which position I had the advantage of taking in a fair area at a single glance." Kath painted her first orchid, a green comb spider orchid while still at school. Some of the orchids she collected at the time are now housed at the State Herbarium, still in the school exercise book they were pressed in.

After more schooling in Adelaide she returned to the farm. About 1940 she corresponded with South Australian orchidologist Harold Goldsack, sending him various orchids of the Wolsely area.

Kath spent some time in the Womens Land Army during WW2. She married soon after the war and raised three children on a farm near the tiny pine forest settlement of Comaum only a few km from the Victorian border and thousands of hectares of bush so much wilder than Wolsely. This rekindled her interest in wildflowers and she began to paint more seriously by 1958, experimenting with water-colours using very fine paint brushes, some trimmed to just a few hairs. Kath also took a particular interest in the way orchids moved into mature pine plantations.

It was not until her children were old enough to look after themselves that Kath was able to paint more seriously and began to correspond again with botanists in Adelaide and Melbourne, sending many specimens which were to prove new records for South Australia or entirely new species. She also developed friendships with local native plant enthusiasts. Between them they made some twenty new records of orchids in South Australia including the first Chiloglottis as well as Pterostylis concinna. It was Kath who first recognized Dipodium campanulatum and Dipodium pardalinum as new species. Today there are several of Kath's discoveries yet to be named.

Some of Kath's new species have been named in her honour, including Triglochin alcockii.

Kath has now painted over a hundred South-eastern orchid species and it would be wonderful to see these published.

Data from 1,630 specimens in the South Australian Herbarius