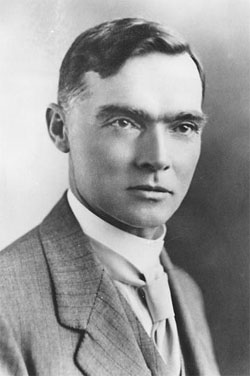 Andrews studied geology under the eminent Professor Edgeworth David and, although he commenced as a school teacher, he developed an enthusiasm for geology and in 1898 was nominated by Professor David to lead an expedition to the Fiji islands and Tonga to study coral reefs . The next year he joined the N.S.W. Depart-ment of Mines and for 32 years filled successively higher posts, being Government Geologist from 1921 until he retired in 1931. He had a distinguished career and was a member of many societies, including the Royal Society of N.S.W., the Linnean Society of N.S.W., and was president of the Australasian Associa-tion for the Advancement of Science (1930-32), as well as holding honorary membership of many overseas organizations, for example the Washington Academy of Science.

Whilst most of his writings were on geological and geographic subjects, he also wrote The Geologic History of the Australian Flowering Plants (1916) and Origin of Pacific Insular Floras (1939). Another paper was 'The Development and Distribution of the Natural Order Leguminosae' in J. and P. Roy. Soc.N.S. W. 48 (1914). He had a close friendship with J. H. Maiden and R. H. Cambage, which increased his intense interest in Australian plant ecology and the geographical distribution of the native flora. He was well-liked as a kindly and unselfish person.