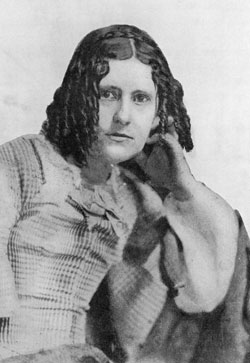 Miss Atkinson spent most of her life at Kurrajong Heights in the Blue Mountains near Sydney. She became well-informed on the Australian flora and collected extensively for the Rev. Dr W. Woolls (q.v.) and F. Mueller (q.v.). Her maiden name is commemorated in the loranthaceous genus Atkinsonia, whilst both her maiden and married names have been given to species.

She was regarded as an excellent botanical artist and was also interested in zoology, as well as being a very competent taxidermist. In addition to the above she was one of the earlier writers of Australian fiction, but her botanical work is regarded as far more important. She married James Snowden Calvert in 1870.

Collected extensively around Kurrajong and Berrima, New South Wales, and a colleague of William Woolls.  Many of her specimens were sent to F.Mueller, and are now to be found in Melbourne (MEL) (some also in JE).