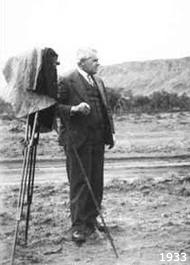 At an early age he became interested in natural history and with two friends E. B. Nicholls and C. P. Kinane spent week-ends at an engaging spot east of Melbourne; as a result he wrote in the New Idea a series of pleasant articles entitled 'Our bush hut on Olinda'. These became the subject of his first book, From Range to Sea: A Bird Lover's Ways (1907), a sensitive group of essays that led to many other writings on natural history.

Meanwhile in 1906 Barrett had joined the staff of the Melbourne Herald and for the next thirty-three years informed the public on natural history matters through feature articles, answers to correspondents, and books such as the Sun nature and travel books, edited by him and published under the auspices of the Herald and Weekly Times Ltd.

Barrett had no formal scientific training but was an associate and friend of specialists in the Field Naturalists' Club of Victoria (from 1899), the Entomological Society of Victoria and the Royal Australasian Ornithologists' Union, of which he was a foundation member in 1901 and assistant editor of its publication, Emu, in 1910-16. He was prominent in the formation of the Bird Observers' Club in 1905 and was a fellow of the Royal Zoological Society of London and a corresponding member of the Zoological Society of New York. In 1925-40 he edited the Victorian Naturalist.

In June 1916 he enlisted in the Australian Imperial Force and joined the Camel Brigade Field Ambulance which left for Egypt in May 1917. He edited an issue of the Field Ambulance's journal, Cacolet, and in April-December 1918 the monthly Kia-ora Coo-ee. A visit to the Nile valley left him with a lifelong interest in Egypt.

After World War I Barrett travelled widely throughout Australia: by 1935 he had visited the Great Barrier Reef, explored the Nullarbor Plain area, and crossed central and northern Australia with his wife as companion and 'assistant naturalist'. He published numerous works of travel and natural history, some aimed specifically at youthful readers. In 1920-27 he also edited the boys' paper Pals. During World War II he visited troops in northern Australia and New Guinea, lecturing on practical bush lore. When his son Donald settled in New Guinea after the war Barrett paid him several extended visits. In 1953 he was awarded the Australian Natural History Medallion.

Barrett was of stocky build, remembered as a courteous man who always went out of his way to be friendly and co-operative; an inveterate pipe-smoker who 'enjoyed spinning a good yarn'; he spoke in a soft, rather high pitched and emphatic voice.