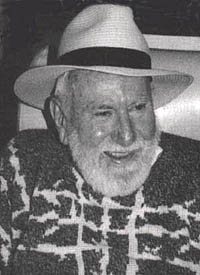 Noel Beadle grew up on the edge of bushland in western Chatswood on Sydney's North Shore. His father had studied horticulture before coming to Australia and knew the Latin names of many plants and he used them at every opportunity. Noel therefore developed an early understanding of how plants are named and spent many hours roaming through the bush near his home becoming familiar with the individual plant species.

After attending North Sydney High School, he enrolled at Sydney University planning to study chemistry and become an industrial chemist. You would think that botany would be an obvious choice as one of his first year subjects because of his interest in plants. However, he chose it mainly because he thought it would involve excursions and he had never been out of the Sydney area. There were no excursions in first year botany nor in second or third year but he became interested in the subject. Perhaps as a result, field trips were always an important part of his own teaching and many students have been astounded and enthralled by his knowledge and enthusiasm, particularly when out in the bush.

After an honours year studying the respiration and carbohydrate content of tomatoes, he completed a Master of Science studying the same topics and was employed as a Demonstrator in the Department of Botany at the University of Sydney. He was beside himself with excitement when he was invited on a collecting trip by car, organised by the Linnean Society of New South Wales in 1939. This opportunity was a major event for a young man fascinated by travel but who had never been west of the Blue Mountains. The route was west to Broken Hill then north to Miparinka and Tibooburra and thence to Wanaaring, Bourke and back to Sydney. Noel was responsible for pressing and drying the 600 plant specimens representing about 300 species that they collected along the way. He later spent much time, often with the help of botanists from the National Herbarium, in identifying many of these specimens.

Later in 1939, the newly formed Soil Conservation Service advertised for a Research Officer and Botanist to work in western New South Wales. Noel was appointed to the position and was instructed to do a soil erosion survey of the western country. He made Condobolin his headquarters and commenced work using a 1937 Chevrolet car for transport. He achieved far more than a simple erosion survey. He produced the first coherent classification and map of the vegetation of western NSW and his work was published by the Soil Conservation Service in 1948 as "The Vegetation and Pastures of Western New South Wales with special reference to Soil Erosion". This work became a benchmark for studies of its kind and his map is still used by many who marvel at its accuracy, given the conditions under which it was produced. His species lists are also extremely valuable for those interested in changes in vegetation over time.

Noel resigned from the Soil Conservation Service in 1946 to take up a position first as a lecturer and later as a senior lecturer in botany at the University of Sydney. He developed courses in ecology and became involved in teaching botany at all levels. His work on the factors affecting the distribution of the vegetation in the Sydney district and on the relationships among soil parent material, soil fertility and vegetation was outstanding. It made a major impact on the development of plant ecological thought in Australia.

In late 1954, Noel was appointed the Foundation Professor of Botany at the newly independent University of New England. He immediately set about structuring the teaching and research of the Department around the basic core of plant morphology, taxonomy and ecology. By the time he retired in 1979, many other aspects of botany were being taught and researched including, plant pathology, embryology and plant physiology - all without detriment to the original morphology/taxonomy/ecology thrust. These core topics still remain critical to the teaching of Botany at the University of New England.

Noel was always acutely aware of the importance of adequate keys and floras to aid in the field identification of plant species. During his years in Sydney he spent much time devising botanical keys and giving them to his classes for testing. I was first involved in this process as a second year Agriculture student and was impressed by his vast knowledge of plants and his ability to construct keys which were relatively simple to use. This work resulted in the publication of the "Handbook of the vascular plants of the Sydney District and Blue Mountains" in 1962. He was unable to interest any commercial publishers in the venture and so financed it out of his own resources and it was printed in Armidale. This book was very successful and led to the "Flora of the Sydney District" first published by AH and AW Reed in 1972. His next venture was the "Students Flora of North-Eastern New South Wales" published by the Department of Botany, University of New England in six volumes. All of these works were used by generations of students and have now been largely replaced by "The Flora of New South Wales", edited by Gwen Harden who was one of his former students.

International recognition was enhanced following the publication of "The Vegetation of Australia" in 1981 as part of a world series. This was the first comprehensive monograph on the vegetation of the whole continent and embodied his knowledge gleaned from countless trips and student excursions. He always kept meticulous notes of his travels and used these extensively in his books. His final work was "Botany in the Backblocks", a limited edition skilfully edited by Gordon White and published by the Department of Botany, University of New England in 1995. This final work is a somewhat light-hearted description of the travels and experiences of a botanist with an eye for detail and an acute sense of humour. Of particular interest are his experiences when travelling in western New South Wales in good seasons and in droughts without the benefits of four wheel drive and satellite phones.

An outstanding trait of Noel was that he never hesitated to use his own resources to promote the sciences of botany and ecology and to assist those less fortunate than he. He personally financed the publication of the first editions of his floras and much of his field work. Whilst Professor of Botany he provided an endowment for a prize to the top second and third year students in both botany and ecology and, when he retired, provided further funds for the establishment of scholarships for postgraduate students. The full extent of his generosity to numerous charities is unlikely to ever be known, but is wide ranging and substantial. It includes significant donations to the Royal Blind Society, Red Cross, Guide Dog Association, Multiple Sclerosis Society, the Armidale Hospital and the Guyra Hospital. He also donated a large block of land to the Armidale City Council, which has now been established as a park named "Beadle Grove" featuring native plants of the region. A local Rotary Club honoured him with a Paul Harris Fellowship and honorary membership in 1987 for his contributions to Rotary's Polio Plus program.

As a teacher, Noel Beadle was renowned for his ability to interest and encourage students in the science of botany, particularly in the field. His lectures were always stimulating and students were fascinated by his immense knowledge of botany, contrasting with the postage stamp size of the notes from which he lectured. His broad smile, sense of humour, personal warmth and generosity have endeared him to generations of students and staff alike.