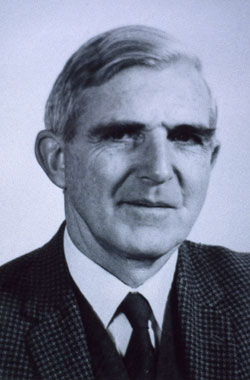 He was educated at Marlborough College, England, and gained his tertiary qualifications at Oxford. His B.A. in 1937 was at the School of Forestry, whilst the other two degrees were both for post-graduate work in tropical ecology in the West Indies. In the period 1937-47 he held forestry positions in the British Colonial Service in Trinidad and in the Windward and Leeward Islands. This was followed in 1947-61 as Estates Research Officer to the Natal Tanning and Extract Co. Ltd, Pietermaritzburg, South Africa, when he worked on crop improvement in the wattle industry. His notable work in this field led to his name becoming widely known throughout the world.

For the period 1961-70 he was Director, King's Park and Botanic Garden, Perth, W.A., followed by 1970-72 as Director of the Royal Botanic Gardens and National Herbarium, Sydney, N.S.W. Since 1973 he has been a private research worker, consultant and publisher, and is an Honorary Associate of the Department of Geography of the University of W.A., working on a phytogeographic survey of the State.

His earlier activities include such a wide range as being a member of the Oxford University Expedition to Greenland in 1936, leading his own botanical expedition to the Guiana Plateau, Venezuela, in 1945 and doing advisory work in Japan in 1966.

Dr Beard has written many books, contributed chapters to other books and written more than 75 scientific papers. Some of his most important works are Climax Vegetation in Tropical America , Ecology ~ (1944); The Natural Vegetation of Trinidad, Oxford Forestry Memoire 20 (1946); The Natural Vegetation of the Windward and Leeward lslands, Oxford Forestry Memoire 21 (1949); The Classification of Tropical American Vegetation Types, Ecology 36 (1955); A Manual of Wattle Growing (1957); The genus Protea-in the Summer-Rainfall Area of South Africa, Bothalia 7 (1958); The Genus Protea in Tropical Africa,Kirkia 3 (1963) and, of considerable value and interest to Australians, Vegetation Survey of Western Australia, maps and explanatory memoirs, sheets 2-6 (1974-81)