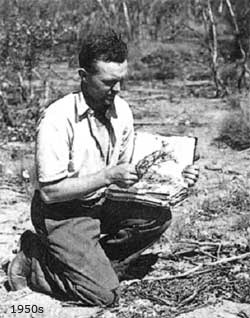 An orchardist at Portland, Victoria, who throughout his life has taken an intense interest in the plants of Victoria, and to a lesser extent, the rest of the country. His herbarium in 1993 was estimated at over 90,000 specimens. Many of these were vouchers for an ambitious project to survey each of Victoria's Study Areas (established by the Land Conservation Council) for distribution and conservation of vascular plants.

In 1970 the Victorian Land Conservation Council (LCC) divided Victoria into 13 regions which were called Study Areas. The LCC investigated and made recommendation concerning land use in these areas. Cliff Beauglehole wrote thirteen books under the heading The Distribution and Conservation of Vascular Plants in Victoria, each written to cover the LCC 13 study areas.

His main herbarium is being progressively lodged in MEL, with numerous duplicates elsewhere (e.g. AD, PERTH), with a duplicate set of plants of the Ballarat area going to the University of Ballarat.

Following a stroke early in 2001, his quality of life was very poor and he died in Portland on 19 January 2002.

Source: Extracted from: A.E.Orchard (1999) A History of Systematic Botany in Australia, in Flora of Australia Vol.1, 2nd ed., ABRS. [consult for source references];
and 'The Field Naturalist Ballarat' website, 12.07.2011.
Photo: ASBS Newsletter No.111