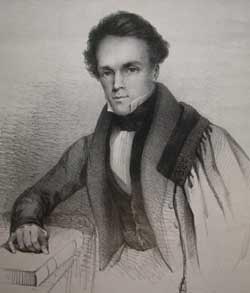 Author of “Wanderings in New South Wales. . . during 1832-4" (1834) and "Gatherings of a Naturalist in Australasia" (1860), which works show him to be a good botanical observer. He was in practice in Sydney for many years. He took great interest in the welfare ot the Sydney Botanic Gardens, and greatly interested himself in the cultivation of citrus fruits. He died in Sydney, 29th September, 1893.

He has been honoured in the plant names:
Flindersia bennettiana , F. v.M.
Eupomatia bennettii was also named after him.
He is also commemorated in the beautiful Port Jackson seaweed Claudia bennettiana , Harv., figured in "Phycologia Australica," the second volume of which was dedicated to him by Harvey.

He was CIarke Medallist of Royal Soiciety of New South Wales (1890).
Portrait in F. M. Bladen's Historical Notes on the Public Library of N.S.W., 1906.