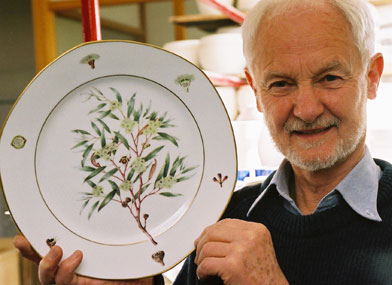 Les Blakebrough is regarded as one of Australia’s leading ceramic artists. His work is represented in the National Gallery of Australia, all Australian state galleries and many international collections, including the British and Danish royal collections. He is the recipient of numerous awards including a gold medal at the International Exhibition of Ceramic Art, Faenza, Italy in 1974, and a Churchill Fellowship in 1992.

Les was born in England and came to Australia in 1948. Since arriving in Tasmania in 1973 he has assisted in the development of artist-in-residency projects, summer schools, guest lecture tours, apprenticeships and research development. These include three Australian Research Council grants during the 1990s.

The Flora Tasmanica limited edition plate series is a fascinating example of a unique research project and the commercialisation of intellectual property. The research project examined a range of types of kaolinclay, looking at plasticity, shrinkage, warping, iron content and translucency in its efforts to produce world class porcelain.

He named the clay ‘Southern Ice’ for its qualities of “whiteness of snow and translucence of ice”. It is now marketed to ceramicists world-wide. In 2001, the University of Tasmania formed the company Southern Ice Porcelain Pty Ltd to manufacture and market Blakebrough’s products.

Blakebrough spent almost five years on the Flora Tasmanica project. Only 100 plates of each design have been produced.