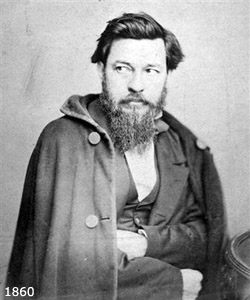 Baptised Johann Wilhelm Theodor Ludwig, he used 'William' during his stay in Australia. He was educated at Culm in the school for Royal Prussian Cadets and later at the Tarnowitz Mining School and the University of Berlin.

In the late 1840s Blandowski resolved to visit Australia to investigate its natural history, to make observations and drawings and to publish them. To this end he departed from Hamburg on 26 April 1849 in the ship Ocean and arrived at Adelaide on 14 September. He set out almost immediately to areas near and to the south of Adelaide. By May 1850 he had examined a large tract of country to the north, east and southeast of Adelaide as far as the Murray River and the Coorong. Early in 1851 he was at Mount Gambier, sketching and mapping the volcanoes, then he travelled overland to Victoria. Following the discovery of gold, he worked as a miner at Forest Creek and seems to have been very successful. Early in 1853 he moved to Melbourne to pursue his original project and applied, unsuccessfully, to the Victorian government for support in publishing an Illustrated Natural History of the Colony of Victoria.

Blandowski helped found the Geological Society of Victoria in 1852 then transferred his energies towards establishing a Museum of Geology in Melbourne. He was appointed to the post of government zoologist in charge of the museum in April 1854. During his appointment he undertook three important expeditions: through Central Victoria (1854), along the Mornington Peninsula and Western Port districts (1854-55) and to the region of the junction of the Murray and Darling rivers (1856-57). As well as making sketches of the scenery and the items collected, the expeditions used a camera to record sites of geological interest. Blandowski may not have been chiefly responsible for the artistic record; the first expedition included a photographer called Brown and on the last the German naturalist Gerard Krefft contributed about 500 drawings to his portfolio. No surviving photographs from any of the expeditions are known.

Following his return to Melbourne from the last expedition in September 1857, Blandowski's remaining time in Melbourne was taken up with a series of controversies: with colleagues in the Philosophical Institute of Victoria about his scientific paper on the expedition; with Professor Frederick McCoy, who by now had control of the museum; and with the government over expenses associated with the expedition, his salary, ownership of specimens and, more importantly, ownership of his portfolios of sketches. His 'Preliminary Report on Recent Discussions on Recent Discoveries in Natural History of the Lower Murray' presented to the council of the Philosophical Institute on 2 September 1857 was ordered to be published minus the 'objectionable' pages dealing with new species of fish named after council members (e.g. 'A fish easily recognised by its low forehead, big belly and sharp spine').

Blandowski left Victoria on 17 March 1859 in the Mathilde and returned to Germany, first to Berlin and then to his home town, Gleiwitz, where he took up a new profession, that of photographer. His attempts to publish his Australian work proved fruitless. In September 1873 he was admitted to a mental asylum in Bunzlau and remained there until his death three years later. Following his death some of his 4000 sketches, photographs and manuscripts were acquired by the Royal Library in Berlin, but later these were dispersed throughout other institutions and not all material has been traced.

Specimens at MEL, NSW (1), but others taken to Europe, e.g. K; label data may not always be correct (Kraehenbuehl, 1996).
Plates at Mitchell & Australian National Libraries.