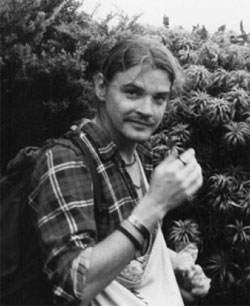 Anders Bofeldt, well known and well-respected plant conservationist, particularly for his work in rainforest conservation and threatened species, died in his beloved Illawarra on the 30th June 2011, aged 46.

He was one of southern Australia's leading rainforest field botanists, and certainly the best the Illawarra has had in a long time - as few have as much field time as Anders who was constantly searching the bushland and its flora.

Anders unexpectedly passed away as the result of a complicated infection, beginning with a spike from a Canary Island Date Palm. It was only on his passing that his mother revealed the irony that he was conceived on the Canary Islands. Despite this, he hated the species, outraged that it was allowed to be planted in subdivisions, and was now an environmental weed in many of the Illawarrs's remnant bushland - recently complaining that he was always getting spiked when pulling it out.

Anders spent his life increasing his knowledge from his teenage years until his death, he had a particular penchant for rainforest plants but was also adept at identifying hundreds of other taxa. Anders explored their biology (especially reproductive biology and floral structure), gathered knowledge of their ecology, detailed know-how in their propagation, how to store their seed and how to conserve them. This information was a valuable addition to the Royal Botanic Gardens (Sydney) project 'Ecology of Sydney Plant Species', published in the journal Cunninghamia, and contributes to information on the RBG's PlantNet website, the Illawarra biodiversity strategy, various university student publications, and in the hundreds of plant survey lists, many of which were done for community groups to help them manage, conserve their remnant bushland.

His collections are held primarily in the NSW National Herbarium.