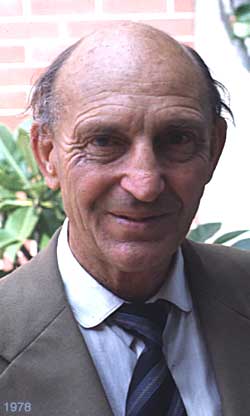 He studied science at Adelaide University and Forestry at the Australian Forestry School, Canberra. In 1939 following graduation dad was posted to Penola Forest for a brief period before moving to Mt Burr Forest working for the Woods and Forests Department.

His passion for plant ecology continued with a master's degree focused on the ecology of Fleurieu Peninsula amongst some other regions in South Australia. Other survey work followed and formed the basis of his knowledge about species distribution and plant taxonomy. Professionally he liked geology and soil science and his early years got to do many soil surveys for the Department. He tramped every inch of the Fleurieu Peninsula, often camping overnight, with his camping pack of a lump of corned beef, a jar of marmalade, one of sugar, one of salt and a kerosene lantern.

Over the next 35 years as a forester with the Woods and Forests Department. He had a great many professional duties. At one stage he was responsible for the oversight of Second Valley forest which is within the Fleurieu Peninsula and as early as 1949 described the benefits of superphosphate to the pine plantations of that region.

He continued to study and write about native tree species and ecology of South Australian woodlands describing many Eucalypt species endemic to the drier regions of our state. He wrote and coauthored several books on tree planting and the forest vegetation in South Australia. Sadly, Tree Planting Guide for South Australia is out of print now–but it is still a great book on the subject.

During the 1980s he established an arboretum at Monarto in the Adelaide hills consisting principally of the endemic South Australian eucalypts. This is a fitting memorial to his association with the State's gum trees.

A forester with the Woods and Forests Department of South Australia who has developed a wide knowledge of the trees of that State, particularly Eucalyptus and Acacia. His major publication is Native Trees of South Australia (1972), but he has written a number of other departmental and scientific papers. His collections are housed at AD.