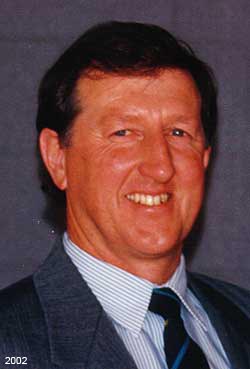 I don’t remember being particularly interested in natural history as a kid, but my father kept all manner of pets (fish, birds, guinea pigs, dogs, bees) and encouraged an interest in living things in general. He eventually developed a goldfish breeding enterprise which became a major supplier to the pet shop industry.

When I went to university, after a brief flirtation with chemical engineering, I decided to do zoology, finally majoring in entomology for my PhD. Whilst at university I developed a strong interest in bird watching, bushwalking and natural history in general. I also became a conservation activist involved in the early campaigns against the excesses of intensive forestry practices, particularly clearfelling of native forests for woodchips and the huge expansion in pine plantations of the late 1 960s and 70s.

After completing my PhD in 1975 I joined the NSW Department of Agriculture and moved to Bathurst to work on integrated pest management of the pests of apple orchards. This was followed by a transfer to Orange in 1980, where I have been ever since. I worked as a research entomologist until 1992, before becoming a Program Leader in Horticulture in the Department’s Head Office, which had been decentralised to Orange.

I became interested in native terrestrial orchids after having them pointed out to me by a companion on a bushwalk in about 1978. I think I was very receptive to this trigger since I recall having been fascinated by two early orchid books — Nichols’ “Orchids of Australia” and Cady and Rotherham’s little book “Australian Native Orchids in Colour”. As a student I had actually bought the latter and admired the former, but could not afford it, even at the discounted price of $17 when it was remaindered in Grace Bros. at Broadway in Sydney — I was sorely tempted and remember the occasion well! Oddly, despite having read about native orchids and being impressed by their beauty and diversity of form, I had not seen them in the bush, despite much time spent bushwalking and bird watching. It took someone to point them out to me to get a sense of their size and where they grew. From then on orchids took over. I read all I could about them, particularly their biology and pollination. I began to photograph them and would go on long trips searching them out. They have been my main interest ever since.

I amassed a large collection of orchid slides, but was never tempted to grow them. I was content to find and photograph them in the bush. This led to an interest in nature photography which deepened after joining the Orange Camera Club. Participation in club and national competitions developed my photographic skills to a high level. My aim was to take photos as good as those of Edward Rotherham — his work was my early benchmark. When I thought I had achieved this I began to assemble the material for my own book on orchids. This idea came to an abrupt halt just before Christmas in 1991 when a house fire destroyed my entire slide collection.

Following this loss my interest in orchids took a new direction. The concept of a book was abandoned and I decided to concentrate on orchid pollination biology.

The seeds of this were sown in the research for my book, but took hold after a meeting with Rod Peakall in Western Australia in 1987. Rod’s PhD work on pollination of WA terrestrial orchids was quite inspiring. In the mid 1980’s I also first met Mark Clements, and later David Jones, at the Australian National Botanic Gardens when I took them photos and specimens I could not identify.

My pollination work was given a major boost by grants from the Australian Orchid Foundation which enabled me to undertake an ambitious program to determine the pollinators of sexually deceptive Drakaeinae and Caladeniinae in eastern Australia. This work provided an opportunity to combine my entomological skills with my interest in orchids to unravel the pollinator relationships of these groups. The work has led to the discovery of many new cryptic orchid and thynnine wasp species, by virtue of the specificity of their sex pheromone signals. Voucher specimens of most of the populations utilised in this work have been lodged with the herbarium in Canberra.

Why do I do it? There are many reasons; from the pleasure of getting out into the bush, to the thrill of a new discovery, or the satisfaction of piecing together the complex patterns of interaction between orchids and pollinators. There is also the fellowship of like-minded souls among the many enthusiasts who have helped me, and whom I in turn have been able to assist, giving rise to many lasting friendships. I have to admit I’m well and truly hooked, and will probably be pottering about with orchids and their pollinators until I’m no longer capable.