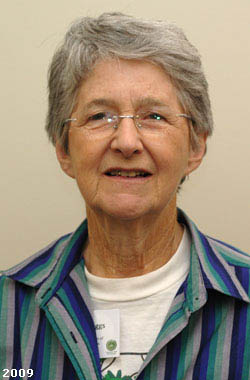 Her tertiary qualifications were secured at the University of Sydney. Her PhD thesis was 'Studies in the experimental taxonomy of Ranunculus and Darwinia'.

In November 1969 she joined the National Herbarium of NSW, Sydney, as a Botanist and in turn became a Research Scientist, Assistant Director (Herbarium) and then Senior Assistant Director (Scientific). She is a member of the Linn. Soc. of NSW, Aust. Systematic Botany Soc. and the Ecol. Soc. of Australia.

Her special interests include plant evolution and southern hemisphere biogeography.


Our quiet achiever Dr Barbara Briggs reached another milestone late last year although it is one she probably prefers not to dwell on. She turned 80, but quietly frustrated our attempts to organise a celebration of this at the Gardens by going travelling for a month or two, as is her wont.

Barbara retired from the position of Senior Assistant Director Plant Sciences here at RBG Sydney in 1997 after nearly 37 years as a botanist and administrator. Since then, she has continued her research studies, mainly on Restionaceae, as an Honorary Research Associate.

To me, she seems to have maintained an admirable balance between her research, her travels to the farthest reaches of Australia and overseas, and other activities such as yoga and choral singing.