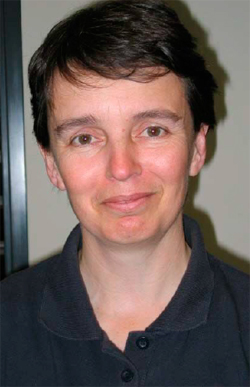 Elizabeth was the second child and only daughter of Barbara Brown (née Bray, 1929-1998) and John Martin Ainley Brown (1928-2005) Professor of Plant Physiology, the University of Auckland) who emigrated from the Newcastle area of northern England to New Zealand in 1956. The family eventually moved into a house at Parnell where Elizabeth's younger brother David was born.

Elizabeth attended the Parnell Primary School and in her final year was dux of the school. Her secondary education was at Epsom Girls Grammar, Epsom, Auckland. She undertook a Bachelor of Science degree at the University of Auckland, followed by a Masters of Science degree by thesis (Some Studies in the New Zealand Targioniiae and Marchantinae), graduating with honours in 1981. Also at the University of Auckland, she completed her degree of Doctor of Philosophy on Studies in the New Zealand Aneuraceae in 1987.

In March 1989, Elizabeth became the second recipient of the Research Fellowship at the National Herbarium of New South Wales (NSW). She had completed a revision of the genus Riccardia S.F.Gray in New Zealand as part of her PhD studies (Brown and Braggins 1989). NSW was then inviting botanists from fields where they lacked expertise to work at the herbarium for short periods of time. NSW was delighted to welcome Elizabeth, an expert in liverworts. After her fellowship ended, Elizabeth stayed on at NSW using her own funds, participating in several field trips, adding to collections and knowledge, and forming links with other Australian bryologists. For several years she filled in temporary vacancies and job-shared part-time until, in 1993, she was appointed as a botanist (Scientific Officer) at NSW. In her new position, she continued her research on liverworts, curated the cryptogam collections and specialised in the systematics of the Ericaceae after Jocelyn Powell retired.

She continued as a Scientific Officer, unwilling to promote herself, partly because of a lack of confidence to seek advancement in the more competitive New South Wales Public Service Research Scientist scheme, and partly because she was satisfied with her employment classification. Elizabeth wrote most of the Asteraceae flora treatment for the Flora of New South Wales. She had a great liking for the daisies and continued to be interested in the family after finishing the flora account. Although she did not publish any research on this family, she knew it very well and was often called to do the more difficult identifications. She passed on a lot of her knowledge and had many discussions about these plants with Louisa Murray, also a flora writer of Asteraceae.

From 2006 until her illness, Elizabeth was the Scientific Editor of the scientific journal Telopea, generously assisting and encouraging authors who were not comfortable with the electronic publishing process. One of her major contributions to the journal was to guide the manuscript submission and management process from emailed files to full electronic online publishing. Elizabeth was an active member of the Australian Systematic Botany Society Inc., being Treasurer from 2001-2002.

Elizabeth loved field work and managed to go to many places every year. Partly as a result of her annoyance at the ever increasing level of public service bureaucracy, Elizabeth personally funded many of her field studies. Her most travelled spots were Australia (particularly Tasmania and Queensland), New Caledonia, Fiji, and New Zealand, but she also made brief visits to Malaysia, Papua New Guinea and Vanuatu. However, when her collections are studied in detail, it was Lord Howe Island (New South Wales) that she visited most. She first went to Lord Howe Island in 2000 and then went whenever she could manage it, sometimes twice in one year. She maintained a long-term collaboration and friendship with Ian Hutton, specialist naturalist of the Island, who acted as a guide and joint collector over many years. In November 2000 Elizabeth and Barry Conn helped Jenny Le Cussans, a short-term resident of the island, establish an herbarium which is now housed in the Lord Howe Island Museum.

Each of Elizabeth's days in the field was long. After all the processing of the vascular plants was complete, the bryophyte collections were attended to. Open envelops of bryophytes were pegged to temporary clothes lines criss-crossing the room, while others were balancing precariously on or next to the air-conditioner that had to remain on all night, even though this made sleeping uncomfortable. The preparation of the evening meal was never considered until all collections had been dealt with.

Elizabeth was diagnosed with primary liver cancer (intrahepatic cholangiocarcinoma) in early July 2013. Unfortunately the cancer was spread all through the bile duct and liver. Although she undertook chemotherapy it was soon evident that she was very sick, and soon after some time in the Royal Prince Alfred Hospital, she was told that although the chemotherapy had reduced the advancement of the cancer, it would not help her to get well. She still tried to come to work for an hour or so, looked after by her friends in Sydney.

She died peacefully at her home in Tahmoor in the early hours of 17 November 2013.