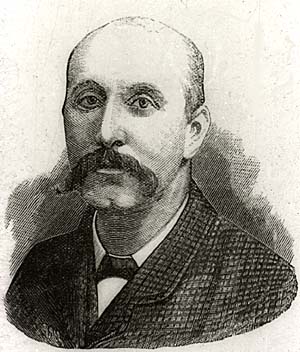 John Ednie Brown was born in Scotland, the son of James who was deputy-surveyor of woods and forests and an expert on arboriculture. John left school aged 15 to work with his father. Following three years training with him, John was sent to the Invercauld Estate in Aberdeenshire, and subsequently to Yorkshire and Sussex where he was responsible for laying out plantations and managing estates.

In 1871-72 Brown visited North America and wrote a paper on the trees of California and Forests of the eastern states of America for which he received prizes. In 1878 he was offered the post of conservator of forests in South Australia and arrived in the colony later the same year. Brown's first report on South Australian forests and their possibilities was not adopted, but in 1880 he wrote A practical treatise on tree culture in South Australia and 3000 copies were distributed by the government. He exhibited specimens and literature in Scotland, in 1884 winning a silver medal and diploma. His reputation was growing and he was regarded as the 'most competent man in dealing with forestry in all the Australian colonies'.

In 1890 Brown was offered the post of Director General of Forests in New South Wales at an increased salary, but the government later made economies during the Depression and abolished this position. In 1895 he was engaged by the Bureau of Agriculture in Western Australia to examine that colony's forests for marketability. Following the publication of the report, Brown was appointed Conservator of the newly created Department of Woods and Forests, and the value of Western Australia's timber exports increased fivefold.

John Ednie Brown was considered the 'first authority on timber in Australia'. His written work was vast, well reasoned and detailed, and The forest flora of South Australia is considered his most significant work.

His herbarium is in AD and MEL.