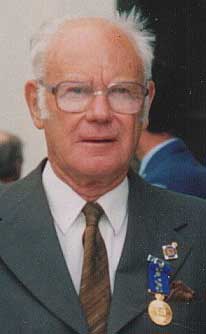 James Howard Browne was born in Melbourne in 1919 and grew up in Red Cliffs where he has spent most of his life apart from the war years. He left school at 14 and trained as a tailor before joining the army in 1939. Howard served in Darwin during the bombing and later in Bougainville where he was blinded in one eye. He worked as a gardener for the Mildura Shire council and established innovative street plantations of native plants.

Howard developed a keen interest in the local flora and he has collected over 1000 plants for La Trobe University and the National Herbarium. He discovered at least 17 new species for Victoria, including Calandrinia volubilis in 1974, the first Australian record for that species since 1863, Halosarcia syncarpa first Victorian record since 1897, and the rediscovery in Victoria of Sarcozona praecox which was presumed extinct. Howard was involved with local Field Naturalists, helped in setting up the Inland Botanic Gardens, and contributed to journals such as the Victorian Naturalist. All of the collecting and monitoring of plants has been on a volunteer basis.

Howard was awarded the Order of Australia Medal in January 1991 and an honorary Masters of Science Degree from La Trobe University in April 1992 in recognition for his contribution to teaching and research.