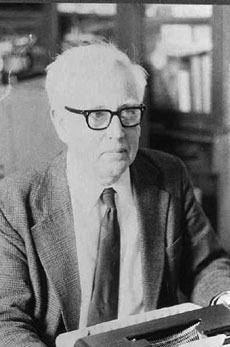 At the time of his death he was a Life Member of the Launceston Field Naturalist’s Club. He had contributed to this club as Vice President for several years and also worked as Editor of the newsletter. On 26 th January, 1983 The Examiner newspaper wrote: "Mr Burns is one of Tasmania’s foremost naturalists and is the co-author of several books. He is also a local historian of note. He wrote Wildflowers of Tasmania in conjunction with H J King, and Van Dieman’s Land Correspondents with J R Skemp. He was also instrumental in gathering many of the specimens illustrated in the Endemic Flora of Tasmania compiled and sponsored by Lord Talbot of Malahide."

His Family recalls that he had a study off the kitchen. It was a multi purpose room which at Christmas my Grandmother used for the family to have Christmas lunch at. It was an ideal table to lay out specimens of plants and seed. Behind this was a roll top oak desk, made by one of his students at the Launceston Teachers College. The cards were fascinating, strappy pieces of plants, whispy grasses, taped onto yellow cards with extensive directions, of their collection, places, times, dates, temperatures and also the details of their sending to Kew Gardens. No-one was allowed to touch them without his permission. His study door was always kept locked.

Senator John Watson wrote of Tom, "Your interest and knowledge of Australia’s history and Flora ….. has made it possible for others to discover more of the variety and beauty of our Country."

On 25 th March,1983 Thomas Edgar Burns was invested with the Order of Australia Medal (General Division) for Community Service.