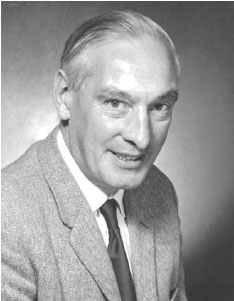 He was the third son of James EdwardCahill and Elizabeth Brindley and the youngest of six children. He attended a Catholic primary school and a non-ecclesiastical high school in Hanley, Stoke-on-Trent. His first employment was with Stoke Municipal Electricity Supply Corporation as a clerk. At this time, he also attended North Staffordshire Technical College to study science subjects for the London B.Sc. degree.

In 1940, Denis was called up into the RAF. He served during the early years of the war as an Airframe Fitter and Instructor. In 1942, he joined the unit 3226 Servicing Commando and saw action in the landings in Sicily, south of Syracuse, and in Italy at Salerno. He returned to England in 1945 and following demobilisation temporarily resumed work withthe Municipal Electricity Authority in Stoke-on-Trent, before commencing a 3-year degree course at Manchester University with the aid of an ex-Serviceman’s grant.

Denis graduated with First Class Honours in 1948 and took up a 3-year appointment as Assistant Lecturer in Botany at the University. He also enrolled for postgraduate study, and was awarded a Ph.D. degree in 1952. Following graduation, he applied for a Senior Lecturership in Botany at Melbourne University. He moved to Australia to take up thisappointment in 1953.

In 1955, Denis married Stella Grace Maisie Fawcett, widely-known as Maisie, who was also a Senior Lecturer in the Botany Department. In1958, he applied for the post of Professor at The Queens University, Belfast. Denis and Maisie left Melbourne for Belfast in 1959, for Denisto take up the Chair in Botany, and Maisie to commence a ResearchFellowship at Queens.

In 1967, Denis was offered the post of Professor at The Australian National University, a foundation appointment in the newly-formed Research School of Biological Sciences in the Institute of Advanced Studies. Denis and Maisie arrived in Canberra at the beginning of 1968 for Denis to take up the post of Foundation Professor and establish a Department of Developmental and Cell Biology at RSBS.

Denis and Maisie pursued wide-ranging productive research careers during their many years in Canberra, including their acclaimed work on the biology and evolutionary taxonomy of the Eucalypts. During his tenure at RSBS, Denis was active in University affairs. He served as Chair of the University Library Committee for many years, was Acting Director of the Research School for several periods and was also Acting Deputy Vice-Chancellor for the University in 1979.

Denis occupied the Chair of Developmental Biology until 1980 when, at the age of 65, he retired as Emeritus Professor. Although officially retired, he and Maisie continued their active research for many years, initially from an office at the University and later from home.

Following Maisie’s death in 1988, Denis continued to pursue an active, engaged life, balancing research with his other polymathic interests, including wide ranging reading in science, philosophy, public affairs, literature and languages which included German, Italian, French and Latin. He engaged with a wide range of people from all walks of life.

He has published extensively in scientific journals and has collaborated with his wife Maisie in work on the eucalypts. Coinciding with the International Botanical Congress in Sydney in 1981, they edited and wrote two volumes of historical essays on Australian botany, People and Plants in Australia, and Plants and Man in Australia. They also published two books (Eucalyptus 1, and Eucalyptus 2).