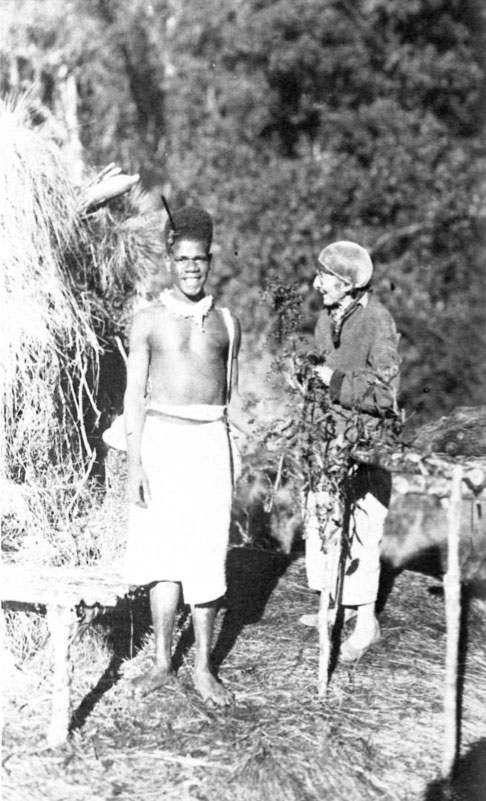 Mary Strong Clemens and Alaseu, a field assistant. On the back of the photograph is the following typed letter from Clemens to a Miss Carrie Harrison of Brookland, Washington D.C., U.S.A.

"Near Timberline Camp. May-June. 1939. Note roof of tussock grass. and the wash-basin by Alaseu on the stump of tree fern. The mossy bush behind me has rusty Rubus and rusty Asplenium. the pond has rusty Viola where the wallaby (marsupials) play. Pittosporums almost touch one end of the hut, Here grows my n. sp. of Veronica [V. platycarpa] described by Dr Pennell. Podocarpus and other conifers with oodles of heaths and lichens filled our baskets here, but this ancient, borrowed. Boana machine [referring to herself] declines to think more. Mary Strong Clemens"

"Plane is due, this is just to acknowledge your letter with the astonishing prices for grass as l have given about a ton of alpine ones for naught. Just arrived from the most strenuous 9 days hike of my life. M.S.C." 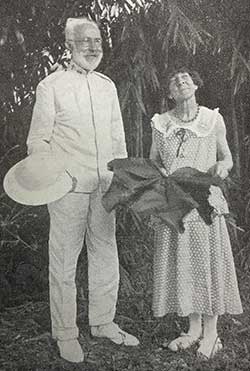