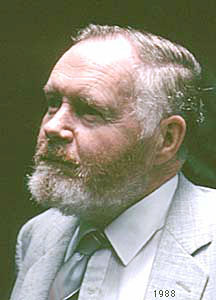 Arthur Court developed an early interest in ferns and orchids, particularly those of the area In which he lived, the Dandenong Ranges in Victoria. He was educated at the University of Melbourne, from which he graduated as Bachelor of Science.

Arthur commenced employment with the Department of Crown Lands and Survey, Victoria, at the National Herbarium of Victoria on 21 November 1955, taking up a position as botanist in 1957. His work lay especially in the genus Acacia and he collected extensively in Victoria and South Australia. He contributed the family Mimosaceae for J.H. Willis’s ‘Handbook to the Plants of Victoria’, as well as preparing the nomenclatural data for that work. During 1966/67 he was ABLO at Kew.

When the position as Curator of the Herbarium at the (then) Canberra Botanic Gardens became available in January 1974 he applied and was appointed to the position, becoming Assistant Director, National Collections after reorganisation late in 1983. He held that position until his retirement in January 1989.

His time at ANBG was mostly taken up with administrative duties, but his knowledge of Acacia, and the information about the genus he had collected together, were available to those who needed it. His advice on nomenclatural and taxonomic matters was always helpful.

Over the years of his working life he published in ‘Victorian Naturalist’, ‘Muelleria’ and ‘Nuytsia’.