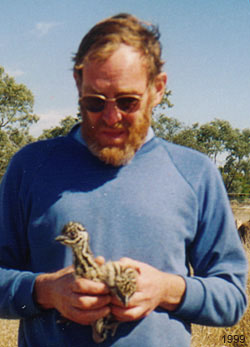 Ralph spent his childhood on his parents’ fruit and vegetable farm at Applethorpe. At age sixteen the family moved to Taringa and shortly after he became apprenticed to a local builder and later became self-employed, constructing houses around Brisbane. In the mid 1970’s he became interested in orchids and joined the Native Orchid Society of Queensland, the John Oxley District Orchid Society and the Species Orchid Society. Shortly after he began to take more of a scientific interest beginning with the orchids local to the Brisbane region and later extending his activities much further afield.

Ralph, who proudly described himself as a “bushie”, was self-taught in the field of native orchids. At first his interest centred on gathering plants for cultivation, but then he moved to more scientific pursuits, gathering specimens for the collections at the Queensland Herbarium and the Australian National Botanic Gardens in Canberra. He also carried out a detailed survey of the orchids of Brisbane Forest Park, during which he discovered the recently described Pterostylis scoliosa. Many of his scientific endeavours were supported by funds from the Australian Orchid Foundation and it was apparent to the directors from an early stage that Ralph was not only extremely good value for the money spent but also the discoveries he made were of great importance. Ralph also received some funds from the Native Orchid Society of Queensland.

Ralph had a hunger to learn and travelled thousands of kilometres over the back roads of Queensland in his pursuit of orchids, often sleeping in the back of his four wheel drive. He visited coastal districts and islands such as Fraser Island and Moreton Island and climbed numerous peaks including Mount Ballow and Mount Maroon. He was the first to carry out any real systematic recording of the orchids of inland national parks such as Salvator Rosa and Mount Moffatt, discovering a remarkable new Pterostylis sp. aff. woollsii in the process. Ralph had a penchant for turning up new species and interesting records. In all he made over 3000 herbarium collections which were distributed to both the Queensland Herbarium and the Australian National Herbarium, Canberra. Included are some thirty new taxa, most of which await formal description.

Ralph was tenacious in his pursuit of goals as illustrated by the long, convoluted and dogged battle he had with bureauracy to obtain the necessary collecting permits for forestry and national parks. He was also highly successful in following tenuous leads such as old herbarium records. There is no better example of this than his rediscovery of Diuris parvipetala at the type-site of Brigooda (for his colourful account of this rediscovery see The Orchadian 12(7): 298-300 (1998). A number of his collections were based on leads from people who approached him after word of his quest for orchids spread.

Ralph’s loss will be keenly felt. Deepest sympathy is extended to his wife June and their children Diane, Stephen and Judith. In finishing I can do no better than quote from a recent letter received from June. “ Ralph had so many plans for more trips and all this cut short by wretched cancer. He was lucky to have achieved so much in his orchid life; admittedly he worked hard for it and gave it his all. I am very happy that he was able to do what he loved and only hope it has in some small way helped orchid research in Australia.” There is no doubt about that! His contribution to our knowledge of the distribution and diversity of Queensland orchids is immense and is unlikely to be surpassed.