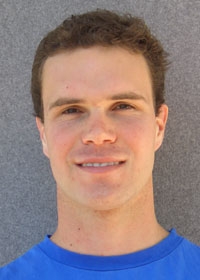 Ed Cross lost his battle with cancer on Good Friday 6 th April 2007. He was widely recognized as one of the rising young stars in Australian plant systematics and his passing is a great loss to Australian botany.

Ed was an exceptional student. In 1994 he won the Dux Medal and the Medal for Academic Merit at Galston High School, in 1998 he received a research scholarship from the University of NSW, in 1999 he received First Class Honours in Botany and Zoology from the University of New South Wales, in 1999 the Hansjörg Eichler Research Grant, in 2000 a CSIRO PhD scholarship and also an ABRS postgraduate research scholarship. In 2005 he won the ACT Division of the Commonwealth Bureau of Rural Sciences Science and Innovation Award for Young People in Agriculture, Fisheries and Forestry. His PhD topic and thesis was an exemplary meld of molecular and morphological systematics.

Ed’s all too brief professional career was dedicated to Australian botany and in enthusing others to share his passion for Australian plants. He was a natural and extraordinarily gifted scientific communicator. While at university he worked as technical officer and laboratory assistant in the J.T. Waterhouse herbarium and Molecular Systematics Laboratory of the University of New South Wales where he was also a demonstrator in botany and ecology. He lectured at the Australian National University and was an inspirational education officer at the CSIRO Discovery Centre, sharing his knowledge and botanical enthusiasm with students of all ages. Ed was employed as a research assistant at the Australian National Herbarium to develop a comprehensive taxonomic treatment of the Heliantheae (Asteraceae) and Eupatorieae for the Flora of Australia and ultimately as a research scientist on a pilot investigation using molecular techniques to identify the progenitors of Lantana camara in Australia for improved biological control.

Ed’s primary research interests covered the ecology, evolution and systematics of Australian and New Zealand daisies. At the University of New South Wales he completed a research project on the molecular systematics of Australasian woody daisies in the genus Olearia where the data showed no support for the monophyly of the genus, challenging the status quo . His PhD thesis, entitled “The Systematics of Rhodanthe and allies (Gnaphalieae: Asteraceae), an integrated approach using molecular and morphological data” was submitted in November 2004 at the Australian National University. In his thesis Ed used a combination of molecular data and morphological data to reconstruct the phylogenetic relationships of over 125 taxa of Australian and New Zealand daisies and explore the evolution of morphological characters used in their classification, again challenging a number of existing taxonomic concepts. From 2004–05, Ed developed a comprehensive treatment of the Heliantheae and Eupatorieae for the Flora of Australia, covering over 100 species in these Tribes.

After his PhD, Ed was engaged in developing a new project in weed management, using molecular markers to characterize the breeding system, genetic variation and higher level relationships of Australian weeds (in particular, Lantana ), the predictive use of genetic data to identify new sources of biocontrol agents, and effective deployment of biocontrol measures by identifying genetic races using morphological characteristics.

A fit, active outdoors persons and keen observer of nature, Ed listed among his hobbies the cultivation of cacti and succulents, conservation and propagation of Australian native plants, breeding of crayfish and tropical fish, camping, fishing and bushwalking with his wife and friends. A devout Christian, Ed was active in his community and led several Scripture Union Family Missions throughout the Riverina.

Ed leaves behind his wife Jess, his parents, and many friends and colleagues who will miss his charm, his generosity of time and knowledge, his wit and his enthusiasm and love for Australian plants and their environment.