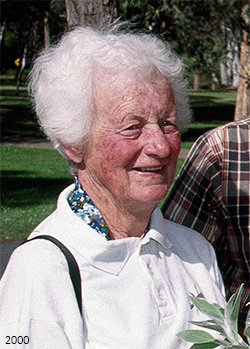 Barbara grew up in Canberra, attended school in Canberra and at the age of 18 enlisted with the Australian Airforce in the middle of the Second World War. She was trained as a radar operator and during the War was posted in various locations around Australia.

After the War she trained as a nurse in Canberra, specialising as a midwife.

Barbara approached the Australian National Botanic Gardens in early 1991 to do some volunteer activity in her retirement.

The weekly hand-out sheet 'In Flower This Week' had been produced by Joyce England since 1985, but she 'retired' from that task in mid-1989. Barbara agreed to continue with this project and produced her first IFTW hand-out sheet on 29 March 1991. At that time it was hand-written and photocopied. It suggested some interesting or attractive plants flowering during the week, and in which Section of the Gardens they could be seen.

In March 1993 Barbara trained herself to use the newly installed Sparc computers in the Gardens as a word-processor to produce a typed version, allowing much easier proofing and corrections, and they continued to be produced on computers until the last one Barbara produced in November 2013.

From April 1997 the IFTW hand-out sheets were also published on the internet linked-to from the ANBG's home page. From March 2002 Barbara teamed up with the Curator of the Australian Plant Image Index to insert one and later two colour photographes into each week's web version of the sheet.