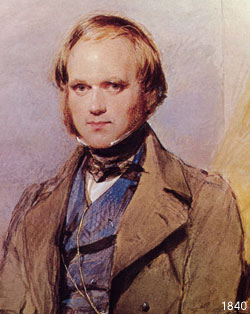 Charles Robert Darwin was born in the tiny merchant town of Shrewsbury, England. He was the second youngest of six children. Darwin came from a long line of scientists. His father, Dr. R.W. Darwin, was as a medical doctor, and his grandfather, Dr. Erasmus Darwin, was a renowned botanist. Darwin’s mother, Susanna, died when he was only 8 years old. Darwin was a child of wealth and privilege who loved to explore nature.

In October 1825, at age 16, Darwin enrolled at Edinburgh University along with his brother Erasmus. Two years later, Charles Darwin became a student at Christ's College in Cambridge. His father hoped he would follow in his footsteps and become a medical doctor, but the sight of blood made Darwin queasy. His father suggested he study to become a parson instead, but Darwin was far more inclined to study natural history.

While Darwin was at Christ's College, botany professor John Stevens Henslow became his mentor. After Darwin graduated Christ's College with a bachelor of arts degree in 1831, Henslow recommended him for a naturalist's position aboard the HMS Beagle. The ship, commanded by Captain Robert FitzRoy, was to take a five-year survey trip around the world. The voyage would prove the opportunity of a lifetime for the budding young naturalist.

Voyage of the Beagle

On December 27, 1831, the HMS Beagle launched its voyage around the world with Darwin in tow. Over the course of the trip, Darwin collected a variety of natural specimens, including birds, plants and fossils. Through hands-on research and experimentation, he had the unique opportunity to closely observe principles of botany, geology and zoology. The Pacific Islands and Galapagos Archipelago were of particular interest to Darwin, as was South America.

The Beagle was anchored at Sydney from 12 to 30 January 1836. During this time Darwin journeyed to Bathurst, making superficial observations on the geology of the Blue Mountains and collecting some native fauna and flora [?]. He was 'rather disappointed in the state of society', and made the misjudgment that 'agriculture can never succeed on an extended scale'. His interest in Van Diemen's Land (Tasmania), where the Beagle stayed for ten days in February, was mostly geological and sociological: he gave a graphic account of the subjugation of the Aboriginals. On 6 March the Beagle arrived at King George Sound; Darwin was noticeably unimpressed: 'we did not during our voyage pass a more dull and uninteresting time'; though he did see a 'corrobery'. The Beagle left mainland Australia on 14 March, then spent from 2-12 April at Keeling Island, now an Australian Territory in the Indian Ocean.

He published an account of the voyage, Journal of Researches into the Geology and Natural History of the Various Countries Visited by H.M.S. Beagle (London, 1839) which ran to several editions.

Charles Darwin's plants from the Beagle voyage were sent to Cambridge University, UK, by Darwin as a gift for his friend and mentor Professor John S. Henslow. Around 2,400 plants are mounted on 954 sheets. This includes 30 sheets from Keeling Islands (now the Australian Territory of Cocos (Keeling) Islands). There appear to be no specimens from the Australian mainland or Tasmania in this collection.

Steve Hopper (2009) in his paper on Darwin's botanizing from a southern hemisphere perspective states: "by the time Darwin arrived in Australia...homeward bound in 1836, his botanical interests had all but ceased."

Upon his return to England in 1836, Darwin began to write up his findings in the Journal of Researches, published as part of Captain FitzRoy's larger narrative and later edited into the Zoology of the Voyage of the Beagle. The trip had a monumental affect on Darwin’s view of natural history. He began to develop a revolutionary theory about the origin of living beings that was contrary to the popular view of other naturalists at the time.

In 1858, after years of further scientific investigation, Darwin publically introduced his revolutionary theory of evolution in a letter read at a meeting of the Linnean Society. On November 24, 1859, he published a detailed explanation of his theory in his best-known work, On the Origin of Species by Means of Natural Selection.

Following a lifetime of devout research, Charles Darwin died at his family home, Down House, in London, on April 19, 1882, and was buried at Westminster Abbey. During the next century, DNA studies revealed evidence of his theory of evolution, although controversy surrounding its conflict with Creationism - the religious view that all of nature was born of God - still abounds today.