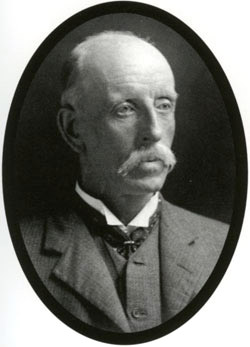 Born in Cheltenham, Gloucestershire, England on 23 May 1847, died 4 January 1920 in Sydney, Australia

Etheridge was the only son of the palaeontologist, Robert Etheridge and his wife Martha, née Smith. He was educated at the Royal School of Mines, London, under Thomas Huxley, and was trained as a palaeontologist by his father.

In 1866 Etheridge came to Australia, working under Alfred Richard Cecil Selwyn on the Victorian geological survey until it was terminated in 1869, and returned to England in 1871. Two years later he was appointed palaeontologist to the geological survey of Scotland, and in 1874 obtained a position in the geology department in the Natural History Museum at South Kensington.

Etheridge returned to Australia in 1887 and was given a dual position as palaeontologist to the geological survey of New South Wales and the Australian Museum at Sydney. While in England he had much correspondence with his friend Dr Robert Logan Jack who had sent him many fossils from Queensland. From 1881 they worked together and in 1892 appeared The Geology and Palaeontology of Queensland and New Guinea, by Robert L. Jack and Robert Etheridge, Junior, an elaborate work with many plates and maps.

He published the essential work on Australian Aboriginal tree art entitled The Dendroglyphs or "Carved Trees " of New South Wales (1918). He classified seventy-seven sites of interest into two types of Dendroglyphs: 1) taphoglyphs, or grave or internment markers, and 2.) teleteglyphs, or trees carved with sacred totems or symbols, located on initiation sites, commonly called Bora grounds. Etheridge was careful to point out that a casual observer may incorrectly assume that taphoglyphs were imitations, developed after European contact, of a wooden tablet to mark a grave. His discussion on antiquity carefully argues that taphoglyphs were created long before European contact, and therefore their purpose should not be equated with that of European gravestones. Etheridge recognized the difficult task of unraveling meaning, but he did establish possible pattems.

Etheridge’s study has a taxonomic research approach: it provides detailed descriptions of the tree’s location, descriptions and diagrams of the designs, and settlers’ impressions of the meaning. The study does not, however, include the Aboriginal point of view, although there are hints of tree art’s sacred nature.