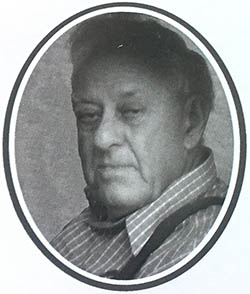 Owen Rowland Evans was born on 18 April 1928 at Norfolk Island.
He is the son of Edward Young Evans and Ivy Chloride Wilcox.

A Norfolk Islander who was a self-taught expert on Norfolk's flora and fauna and who freely shared his passion and exceptional knowledge with eminent scientists and anyone else with a need or wish to know about the wonderful natural world of Norfolk Island. He played a major role in the conservation of the island's plants and animals, leaving a living legacy for future island residents and visitors.

Owen met his NZ wife Beryl on Norfolk Island in the 1950s and spent three years in NZ after marrying there, working on her parent's farm before returning to spend the rest of their lives on the Island.

Their house was often visited by botanist and biologists including Peter Green from the prestigious Kew Gardens in England, who had great respect for Owen's keen intellect and vast knowledge. Beryl's contribution to their partnership was always acknowledged by Owen. And the contribution they both made to the biological sciences was impressive.  Owen focussed on identifying and recording plant life and birds. Beryl specialised in identifying unrecorded species of butterflies and dragon flies by catching specimens and sending them to Sydney or Auckland museums. They both visited Lord Howe Island with Peter Green to continue their work which can be found recorded in many books.

Beryl proudly recounts the story of Owen and herself visiting the Mitchell Library where you needed a reference to get in. With bag over his shoulder as usual, Owen was quickly able to establish his credentials by accurately identifying species that had remained unclassified from a collection by the convict botanist John Doodee between 1789 and 1792.

Owen Evans was awarded the Medal of the Order of Australia (OAM) on 8 June 1981 "In recognition of services to conservation".

The daisy Senecio evansianus Belcher is named in his honour.