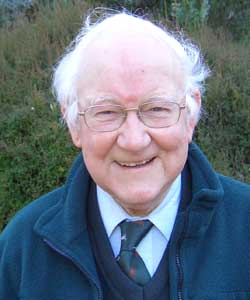 After he left school he joined the Crown Law Department, working as assistant to a Clerk of Petty Sessions; but was soon awarded a scholarship to Melbourne University and enrolled in Agricultural Science, a course which covered a wide range of biological sciences including a large component of botany. The course also included a full and very interesting and formative practical year at Dookie Agricultural College. During summer vacations he was involved in botanical studies measuring the effects of grazing by cattle on the vegetation of the Bogong High Plains, part of the catchment area of the Kiewa Hydroelectric Scheme. He became aware of the complicated sociological ramifications of the cattle industry in that sensitive environment.

Then for three years he was part of a team studying sheep management practices on 150 properties in the Western District of Victoria, one of the most intensive and important sheep-raising areas in Australia. This highlighted for him the pressing need for enhanced extension advisory services for landholders to improve production. This would necessarily involve better adult education.

He was then recruited by Francis Ratcliffe of CSIRO, author of the book Flying Fox and Drifting Sand, to join a new unit to study wild mammals and birds in relation to their environment. High on the priority list was to be a study of the ecology of rabbits in the hope of finding a chink through which they could be attacked. This was intended to be a long-term project, but because the rabbit problem was then so enormous it was decided that they would give priority to investigations into various control techniques --- poisoning, fumigation and biological control. In this last category Myxomatosis had been investigated by CSIR from the mid-1930s to 1943 but with unsatisfactory outcomes. By the I940s it was known from South American work that mosquitoes could transmit the myxoma virus, so they selected a number of trial sites at various places close to the Murray River where rabbit numbers were high and there was a possibility that mosquito numbers were also high. At that time no one knew much about mosquitoes in inland areas of Australia.

For many months the results of their field trials were disappointing but they persisted with the trials. Late in 1950 there was an outbreak of myxomatosis in the rabbits at a trial site near Corowa, NSW. It spread rapidly and dramatically and extended over a wide area. The rabbit population fell to a relatively low level leading to major increases in sheep-carrying capacity. The increase in wool-cut per head was the highest ever recorded. Measuring what was happening and determining which carriers (vectors) were involved was a gigantic task. This took him into a wide range of environments. Seeing at close hand the interaction between rabbit populations and the myxoma virus and seeing also the development of immunity and genetic resistance to the virus, complicated by the rapid development of less lethal strains of the virus, it was apparent to him that there was an urgent need for something to be done about the residual populations of rabbits following the myxomatosis outbreaks. There was a need for adult education about this, as there was a wide-spread idea that CSIRO had solved the rabbit problem and would if necessary find a new strain of the myxomatosis virus!

Although many practical people throughout Australia had been involved with the rabbit problem over many years, much of this ‘control’ work was repetitive and a poor investment. This was because of a lack of understanding of rabbit populations. So he became involved in a lot of adult education, at a practical level, about a sound scientific basis for better control work. This was mainly directed at key people in the rabbit control world, in some cases referred to as ‘rabbit inspectors’, who would be a major channel for conveying this information to those who would ultimately use it - landholders and also departments which had responsibility for agriculture, forestry and conservation.

He transferred to Armidale, NSW, to see why myxomatosis had been relatively ineffective in the New England Tableland (lack of suitable vectors!), and also to get an insight into the nature of the problem caused by wild dogs (dingoes). This involved particularly an assessment of damage caused by dingoes to the cattle industry. A major finding was that there was a lack of biological information about dingoes and hence the need for more research.

In the early 1960s he came to Canberra (to ‘Gungahlin’ homestead) the head-quarters of CSIRO Division of Wildlife Research, and concentrated on spreading knowledge about the findings of the Division on a wide range of species and the relevance of this information to the practical management of them, whether for effective control, eradication, preservation, harvesting or conservation. All this involved a lot of collaboration with public inquirers and a range of government departments.

After he ‘retired’ in 1988 he became a Volunteer Guide at the Australian National Botanic Gardens and took up the challenge to continue sharing technical information with a wide variety of people visiting, in his words, "an environment which is a testimony to well planned and competent management based on sound technical knowledge directed to conservation of the environment".

In his retirement he was narrator for more than 100 'talking books' to assist the visually impared.

The gazettal of the street name 'Fennessy Way' in Forde, a suburb of Canberra, occurred on 1 June 2009.

Bernard has recorded his own 'oral history' with the National Library of Australia:

Source: Bernard Fennessy, in his own words
Portrait Photo: M.Fagg