Paul, at the age of 19, travelled to Melbourne, Australia, where he worked on an orchard in Doncaster. After five years, he purchased a 20 acre run-down orchard, which included a two roomed, dilapidated stone cottage. Marielies, during this time, worked as a gardener at Winterthur, Switzerland, and then at a castle in Slochteren, Holland.

Paul and Marielies corresponded regularly during this time, and after purchasing the land, Paul returned to Switzerland so they could marry there. They wed at Pully on 16th, February 1934, before traveling to Australia.

In Australia, Paul and Marielies repaired and extended their old house and replanted the orchard. They created a beautiful garden around the house and a huge vegetable garden. Over the years of successfully running an orchard, they also raised seven children.

Paul and Marielies were both fascinated by Australian flora, and this interest was passed on to their children and their friends. They regularly set out to explore the natural bushland near their home, and then later they travelled throughout Victoria looking for fungi, fossils, birds, shells, insects and, of course, wildflowers. They had a particular interest in orchids. They collected specimens of each orchid species they found. They recorded name, location and date, and used coloured pencils to draw them; botanically correct, true to size and colour. Their last drawing was completed in 1951. 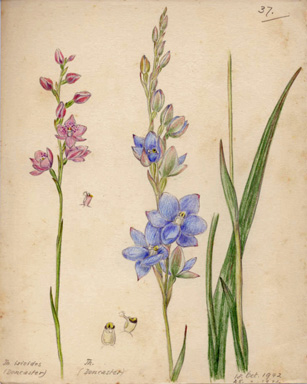 Besides their amazing knowledge and enthusiastic interest in natural history, both Paul and Marielies were multilingual and competent artists. They provided a happy, stable and interesting home for their children (6 girls, 1 boy) and their friends. Marielies was also highly skilled in cooking, knitting, dress making and embroidery and taught all her daughters these skills from a very early age.

After Paul's death in 1962, Marielies sold most of their land, but retained enough around her house to start up a native plant nursery. She experimented with cuttings and had success in propagating many species that were previously thought impossible to grow by this method.

Marielies was a founding member of the Society for Growing Australian Plants. She gave talks, wrote articles for SGAP and was responsible for many 'converts' to native gardens.

In 1975 she sold up and moved to Queensland to live with one of her daughters. Her beautiful Doncaster home and garden were demolished to make way for ever-expanding suburbia. She stayed in Queensland until her death in 1996.

Paul and Marielies' orchid records were misplaced and then forgotten by the family, but in 2022 they were rediscovered in a box of papers that had been stored in a family member's shed. These records have now been donated to the Australian National Botanic Gardens.

Source: Recollections of the children of Marielies and Paul, via Verena Oxlee (email 19/9/2022)
Portrait Photos: supplied by Verena Oxlee.
Original Artwork: held in the Library of the Australian National Botanic Gardens