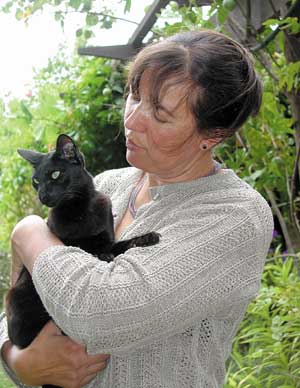 India Flint was born in Melbourne, Australia, but celebrated her first three birthdays in Montreal, Canada. This not only set a nomadic pattern, it meant that when starting her formal education on the family’s eventual return to Australia, learning to speak English was the initial hurdle. Her first attempts at stitching were guided by her maternal grandmother, an infinitely patient re-threader of needles, who overdyed faded garments in various combinations of tea leaves, calendulas and onion skins. As a child, she discovered felt by accident, whilst vigorously scrubbing wool gathered from barbed wire fences near Werribee. Her fascination for textiles was greatly encouraged by her mother, who always seemed to have a piece of embroidery or knitting in progress, and took her through seemingly endless museums during the family’s wanderings around the world!

In 2002 she was living and working with her three children on a property on the eastern escarpment of the Mount Lofty Ranges in South Australia, she combines lecturing in ecologically sustainable dye processes at the South Australian School of Art with research, textile practice, playing tenor saxophone and farming. Most of the wool and plants used in her work are sourced from the farm. Her work is represented in a number of European Museums as well as private collections.

The distinctive Eco-print, developed in the course of research for a Master of Visual Arts at the University of South Australia, has become a defining feature of India’s textile practice. While she has made details of the technique available in order to assist dye practitioners with colour assessment of eucalypts, it is on the understanding the process will not be used on a commercial basis.