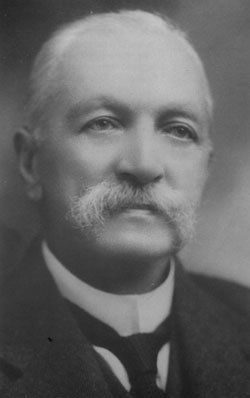 He was the 5th son of Christian Heinrich Wiarda (president of the supreme high court of Aurich, Lower Saxony). The young Carl was sent to Military School, studied medicine, became an officer in the elite Prussian Guard, and won the Iron Cross, First Class, during the Franco-Prussian War. Soon after he gave up his commission and emigrated to South Africa. Here he married Mary Emma Smith, daughter of the Lord Mayor of Port Elizabeth.

From there he emigrated to Australia on board the 'Cutty Sark', and changed his German name to Adam Forster to create a more acceptable identity in the English colony.

In 1897 he was appointed Registrar of the Pharmaceutical Board, an office he held for 23 years until his retirement.

Forster had inherited artistic talent from his father, an accomplished portrait painter. His interest in the flora of his adopted country led him to develop that talent. He set himself the goal of depicting 1,000 Australian wildflowers.

He was then commissioned by George Robertson of Angas & Roberston, to illustrate a book on Australian plants with miniature paintings based on his larger works. The book was initially to have text written by Edwin Cheel, State Botanist of NSW. Soon after completing 248 images for the book he died of a massive heart attack in 1928.

The proposed book was shelved, but 10 years later, George Ferguson, Robertson's grandson, revived the project. On the advice of David Stead his then partner, Thistle Harris, was engaged to write the text for 15 pounds.