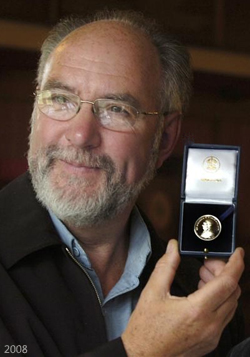 David was born in Invercargill and studied at the University of Otago, Dunedin where he graduated with a Ph.D. in biochemistry. From 1972 to 1982 he was a member of the staff of Botany Division, DSIR, at Lincoln. Following the Sydney International Botanical Congress in 1981 that he led a very successful lichen excursion to New Zealand.

From Lincoln,O David moved to a position in the Department of Botany at the Natural History Museum in London. There in 1985 he completed and published the first edition of the Flora of New Zealand. Lichens, which covered 966 taxa, estimated at the time to represent only 60% of the actual lichen flora. In 1987 he was appointed as Head of the Lichen Division at the Natural History Museum, the same year in which he was also elected as the president of the International Association for Lichenology (IAL).

He was to host a highly successful first IAL symposium on tropical lichens at the Museum in 1989.

After 22 years in London where he published widely on lichenological matters and botanical history he returned to live in Dunedin and in 2007 published a revised second edition of the lichens of New Zealand, this time covering 1706 taxa and in two volumes.