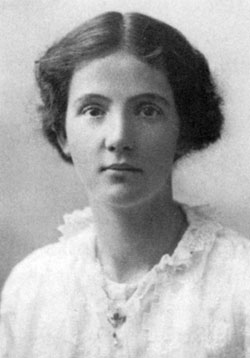 An enquiring mind and empathy with the things of nature led Hilda to develop an unsurpassed knowledge of the local plants and animals, not from books (they yet to be written), but from her

observations. This knowledge she unhesitatingly shared with scientists and others attracted to Tamborine for its then unspoilt biological richness. In the words of Francis Ratcliffe, later Chief of the as a young CSIRO Division of Wildlife Research, who visited Tamborine in 1928:

...in her company we could only listen and learn. She had spent her whole life on the mountain, and knew it as a man knows his own golf course. She knew the habits of every bird and beast that lived there, and where the rare ferns and orchids could be found. The bird kind, I think, were her favourites. She had made friends with them, studied them, photographed them, her infinite patience outweighing the deficiencies of her apparatus. .The least aggressive person I ever met, one thing alone could stir her to anger -cruelty. She fought cruelty with a quiet resolution which spared no-one. ..

The Governor of Queensland, Sir Matthew Nathan, enjoyed Hilda's knowledge of Tamborine when staying at Capo di Monte. Half a century later she was guest of another Governor, Sir Henry Abel-Smith, and instructed him on the birds of Lamington National Park, an area of which she was especially fond and often visited. The eminent naturalist and author A.H. (Alec) Chisholm, then a young journalist on Brisbane's Daily Mail and an editor of the Queensland Naturalist, learnt much of his natural history from Hilda.

Next after birds, orchids were her special interest. She corresponded extensively with orchid specialists around Australia, including the Rev. H.M.R. Rupp, W.H. Nicholls, Dr R.S. Rogers, A.G. Hamilton and F.A. Weinthal, supplying them with photographs and fresh flowering material. The greenhoods (Pterostylis spp.) held a special place in her heart and Nicholls named P. hildae for her. In 1940 she sent him some fresh flowers just to share her joy in them. 'I appreciate the Greenhoods', he wrote, 'they are all Pterostylis hildae which I call "Hilligie"…Your nickname.

In 1926 Hilda sent Rupp specimens of a Tamborine Pterostylis species which she dubbed 'Antelope Orchid' for the curvature of its sepal horns. Rupp regarded it as an undescribed species. Marriage (to Herbert Curtis, a local farmer), family responsibilities and ill-health prevented her from supplying further specimens, and Rupp's, 1947 note and sketch in the Queensland Naturalist seeking public help produced no results. By then Tamborine Mountain was extensively developed and most ground orchid habitat destroyed. Hilda's' Antelope Orchid' remains a mystery.

With a second-hand Thornton-Pickard half-plate camera, Hilda produced photographs of outstanding beauty, developing and printing the plates herself. From 1922 to 1928, she published more than 30 full-page photographic essays in the popular weekly, the Queenslander, mostly of local natural history but also from as far afield as Rockhampton and North-west Island. At a 1925 Naturalists' Society exhibition in Sydney, Rupp displayed what he described as a 'wonderful assortment of photographic studies' by Hilda. 'You are a genius at these photographic studies', he enthused. A Melbourne Punch article by Alec Chisholm headed 'The Romance of Australian Orchids', was illustrated by Hilda's photographs. At the 1924 Beenleigh Show, the Governor in referring to her photographs, described Hilda as one of the State's leading naturalists. Hilda's interests extended beyond birds and orchids. In 1925 Professor C.J. Chamberlain of the University of Chicago, a world authority on cycads, sent her a Leitz microscope and all necessary chemicals so that she could carry out histological work for him. She also supplied him with cycad, moss and lichen specimens. He wrote of one moss, 'that collection alone would amply repay the University for whatever you have received from us'. She also sent specimens to the Queensland Herbarium, the Queensland Museum, and insects to Anthony Musgrave at the Australian Museum, and supplied specimens of giant rainforest snails to researchers.

Hilda was fond of children and was widely loved by them. In the 1920s she contributed nature stories for the Queensland School Papers. Her story 'Elsa the Fern Fairy' (October 1923), ends with 'Dear God of Loveliness', Elsa prays, 'open all children's eyes to the beauty of living things. Touch their hearts to feel that they should not destroy the beautiful handiwork of others, and our world will be blest'.

Following her death in 1988, local residents erected a monument to her memory, bearing the inscription, 'A true pioneer of natural history. We remember her on the mountain she loved.'