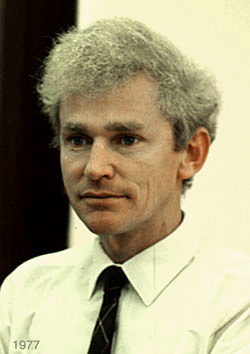 A member of staff of the Western Australian Herbarium 1959-1981.
From 19 January 1981 to 1993 he was foundation Executive Editor of the Flora of Australia.

His research activities span Caesalpiniaceae, Myrtaceae, Orchidaceae and Proteaceae, and he is perhaps best known for work on Banksia, Dryandra, Synaphea and Verticordia. His main herbarium (17 000+ numbers) is in PERTH.

His research career spans many families, with well over 100 papers published. He has made major contributions to, in particular, the taxonomy of the families Orchidaceae, Myrtaceae and Proteaceae. In the latter he is the undisputed world authority on Banksia, and a number of other genera.

The contribution that Alex has made to the Flora of Australia project is difficult to over-estimate, He nursed the program through its formative years, encouraging and cajoling contributors until providing a 'Flora treatment' became an accepted part of an Australian taxonomic botanist's life. Together with the Flora Editorial Committee he developed the formats, guidelines and codes of practice that laid the foundations for the hard-cover published Flora; he oversaw the extension of the series to embrace the mosses, lichens, algae and fungi: and helped implement electronic publication methods and brought a great sense of history, appreciation of illustration and depth of knowledge and experience of the Australian flora to the series.

Source: Extracted from: Dedication notice for Vol.50 of Flora of Australia (1993)

Received an Order of Australia (AM) in the Honours’ list announced 11 June 2012 for service to conservation and the environment as a botanist, historian and author, particularly in the area of Australian flora, and through roles with national and international professional organisations: