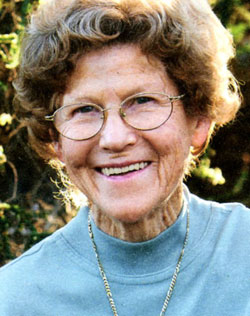 Elizabeth was the third of five children to hotelier Ray Sykes and his wife Colonna (Lee). Colonna died giving birth to the fifth child.

Elizabeth became interested in bush plants as a child during holidays spent in the country with her relatives. She went to Melbourne in her late teens and married Ian Berndt. He was a Myer manager when transferred to Perth, arriving with his wife and two sons.

Elizabeth George was so struck by the beauty of WA featherflowers that over two decades she marshalled legions of volunteers to help her catalogue the species. The effort culminated with publication in 2002 of her celebrated reference book, Verticordia: The Turner of Hearts.

She had been interested in flowers for as long as she could recall and she soon created a native garden at their home in the Darling Range. Before long, her fascination with the genus Verticordia, commonly known as featherflower, would become an obsession. When it did. she began growing them in earnest and photographing them.

She soon recognised that her knowledge was lacking and sought help from the WA Herbarium, which frankly admitted that its classification of the species was wanting - no one knew whether all the names were correct nor whether new species had been properly identified.

Elizabeth obtained a permit to collect verticordia specimens, knowing that the herbarium would assist her with the science. As it happened, her work established the herbarium's 'Verticordia Reference Collection', containing more than 700 specimens for anyone to examine, as well as 2500 other verticordia specimens. For the task, in an era before home computers and mobile telephones, she assembled 250 volunteers from mostly the South West, and the Northern Territory. They sent her specimens of featherflowers. noting when and where they were found.

Elizabeth organised the endeavour with military precision. She insisted on going to meet contacts whenever they had specimens and she built strong support from mostly women in the stretch of agricultural land between Geraldton and Esperance. Over 10 years she assembled a collection of all known species of verticordia — about 25 new featherflowers were discovered in the process and some extremely rare ones that had not been seen for a long time were located.

She mounted all specimens with descriptions and details of their habitat, collating the lot into folders that, in 1988, she donated to the WA Herbarium, forming the collection now housed by the Department of Environment and Conservation near Curtin University.

Elizabeth felt that detailed paintings of all species would serve as an easy method of identification and could also be used in a book, and asked Margaret Pieroni to take on this task. Each painting was purchased by Elizabeth as completed. The originally known 55 species grew to a total of 100 by the time the project was finished. These paintings today are housed with Elizabeth's family. They became the centre piece of her book in 2002 which at the time was seen as an unlikely dream.

Between 1978 and 1988, she completed the Certificate of Horticulture at Bentley Technical College. And she took up ikebana (Japanese art of flower arrangement) taught by renowned floral designer Akiko Chester.

In 1983 her 49-year-old husband suffered a fatal heart attack in hospital after receiving an injected dye before a medical procedure. He left Elizabeth with two teenagers.

Two years later, she married botanist Alex George, who was editing Flora of Australia, an unfinished multi-volume work covering all plants on the continent, sponsored by the Australian Biological Resources Study. The couple lived in Canberra, where the ABRS is based, and Alex helped Elizabeth compile her Verticordia classifications for what turned out to be a seminal reference book. At one stage, Elizabeth and Alex travelled to Europe and studied old specimens of featherflowers in collections in Berlin and Munich. The marriage ended in amicable divorce in 1989. She returned to WA pursuing her interest in Verticordia and other wildflowers.

Life Membership of the Wildflower Society of Western Australian for support of the Society's activities and Branch work was bestowed on her in 2011. Elizabeth was a very active Society member and held committee positions at branch and state level (particularly the garden committee) and was Secretary to the national body of ASGAP (now Australian Native Plant Society, Australia or ANSPA) for two years.