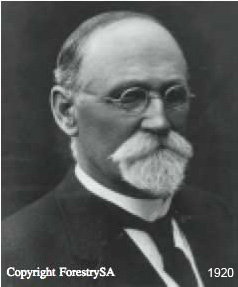 In England Gill started work in a Dorset nursery, of which an uncle was a senior partner, and later joined the staff of a country bank, but in 1876 he migrated to South Australia, working first on the holding of another uncle.  After a brief visit to England in 1881 he returned to South Australia, again working on the land, but in 1884 joined the Government service as an inspector of Crown Lands.  Two years later he became Chief Forester at Wirrabara and in 1890 he succeeded Ednie Brown as Conservator of Forests, a position he held for 33 years.

Gill was responsible for the initial, though by present-day standards somewhat small-scale, planting of Pinus radiata.  This was followed up by larger plantings, notably by G. J. Rodger, which have led to South Australia's prominent position as a supplier of softwood timber.  In an age when few people appreciated the pending shortage of softwood timber, especially in Australia, Gill published a pamphlet (1902) on The Scarcity of Coniferous Timber.

There was a close association of botany and forestry during the period Gill was Conservator, and he collected extensively whilst examining land potential in his State; many of his specimens went to F. Mueller, whilst both J. H. Maiden and R. T. Baker, made use of his material and notes in .their respective works on the genus Eucalyptus. An acacia, was also named after him.  He was a skilled photographer; he wrote a number of papers, mostly on forestry, published in J. Agric. Ind. S. Aust., or in papers of the Australian Association for the Advancement of Science, and there is a valuable record of his work and of forestry in the period in the long series of Annual Reports of his Department.  He was a member of the Board of Trustees of National Parks of South Australia.

In The Cyclopedia of South Australia he was described as ‘a skilful and enthusiastic photographer, having made it a special private hobby for many years. As in other matters, he has turned his personal inclination to good account, for his numerous photographs of forest scenery in various parts of the State, of trees at different ages, showing rapidity of growth and similar objects have been extensively useful. They have furnished illustrations for periodicals and lantern slides for lectures thus enabling him to stimulate public interest in the aspects of forestry of which he is an indefatigable advocate.’

In August 1899 Walter Gill gave a free public lecture, ‘Our Forests, Natural and Artificial’, in the Exhibition Building under the auspices of the Chamber of Manufactures. The Observer of 19 August 1899 reported:

As it is impossible to take but few people to the forests … the Conservator brought the forests to his audience by means of numerous magnificent lantern slides, made from photographs taken by himself on the reserves. Mr Gill evidently believes that illustrations beautifully representing nature impress the mind more than a descriptive lecture without the aid of the photographer’s art, and he made his highly interesting and instructive chat pictorial and explanatory rather than technical and argumentative … The limelight views gave an excellent idea of the growth and character of the towering sugar and red gums, stringybark, and other trees grown in the natural forests, [and] of those produced in the [Government] plantations at various periods of development of experimental work.

Source: Extracted from: The Observer of 19 August 1899