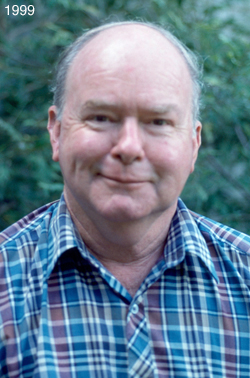 Since the 1990s Richard is known to most of us as the "weed ecologist" and it is in this area that he has probably had most impact on botany in Australia and internationally. Richard began his career at the University of Melbourne where he completed his bachelors degree in 1960 and a PhD (entitled "Experimental Studies on Heath Vegetation") in 1964. From there he moved on to a post doc at the California Institute of Technology on "Developmental Physiology of Scrophularia marilandica". He then had a brief stint at Michigan State University. Richard joined the CSIRO in 1966 to work on the ecology of skeleton weed managing to squeeze in a trip to France, Spain and Italy on the way home to visit various institutions to conduct preliminary research.

At the CSIRO Richard worked on the skeleton weed project. He also developed an interest in the ecology and physiology of kangaroo grass, particularly in factors controlling the shift in grassland composition from Themeda dominated to Poa dominated in the context of the agricultural utility of native pastures. In 1969 he also became chair of CSIRO Plant Industry’s Ecology Section. Through this time Richard’s international reputation as plant ecologist grew and from 1974-75 Richard was a Visiting Scientist at the Department of Pasture Science at the University of Natal. Then, in 1981, he was awarded a Senior Research Fellowship by the DSIR and spent time at their Grassland Division in New Zealand. It was also during this period that Richard made an unexpectedly (in retrospect) important decision, hiring a young post doc by the name of Jeremy Burdon, later to become Chief of CSIRO Plant Industry.

In 1992 Richard went to Montepellier as Officer in charge of the CSIRO Biological Control Unit where he stayed until 1995, during which time he worked on thistles. On returning to Canberra Richard initiated much of his recent work on 'sleeper weeds', which he continued as a Visiting Professor at the Centre for Research on Wild Plants at Utsunomiya University in Japan, where he worked on Oxalis for 6 months between 2002 and 2003. 2004 marks 38 years of Richard’s scientific contributions to the CSIRO Division of Plant Industry and, over the last 10 years, the Centre for Plant Biodiversity Research.

Richard retired from CSIRO on 24 September 2004 and stayed on in post-retirement as a CSIRO Honorary Research Fellow.