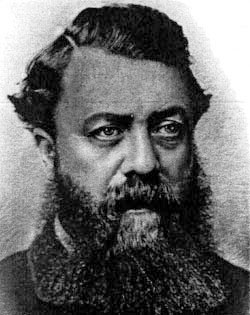 Benjamin Gummow was born in 1830 in Stropshire, England. He died in Echuca, Victoria in 1876.

After his schooling, Benjamin decided to study at the medical school of St. Bartholomew, where he became a Fellow of the Royal College of Surgeons, England.

In 1858, Dr. Gummow and his family decided to emigrate to Australia. They arrived in Port Phillip that same year, travelling irmediately to Echuca in the hope of obtaining a medical practice in that town. This was not possible, so he decided to try his luck further down the Murray, and to this purpose, after purchasing a rowing boat, he loaded his family and belongings aboard and commenced rowing downriver until he eventually arrived at Swan Hill. Harriet Gummow was probably the first white woman to travel from Echuca to Swan Hill by rowing boat.

Although Benjamin Gummow, had not intended to remain in Swan Hill, the local Doctor Morrison had decided to move to Deliliquin at just that time, and as the Swan Hill townspeople did not want to be without a doctor they promised to pay Doctor Gummow a retainer of five hundred pounds ($1,000) per year, if he would remain. Gummow decided to do this, on condition firstly that he had the right to practice over a radius of one hundred miles, and secondly that the townspeople would build a hospital for his use. Both coniditions were agreed to. Over the next three years, Gummow and his wife produced three more children, and the couple played a prominent part in the development of Swan Hill.

Dr. Benjamin Gummow has been described as a very short man in stature, with a long flowing beard reaching halfway down his chest. He built his own home of drop-log construction, situated where the Moreton Bay Fig now stands in Curlewis Street . It had a roof of Typha reeds covered with mud, and was to become the centre of social life in the town.

Dr. Gummow became a Justice of the Peace, the Registrar of Birth, Deaths and Marriages, also the coroner for the district. He was very interested in the aboriginal commiunity, learning the tribal language and seeing to many of their needs. He and his wife were instrumental in having the first Anglican Church built, on the same site as the present one; as there was no resident clergyman, Dr. Gummow would often conduct the regular service himself.

Hospital records indicated that he had contact with Ferdinand von Mueller on botanical matters.

When the Burke and Wills expedition arrived in Swan Hill, their party was made welcome by the Gummows, with Burke spending a great deal of tine in their home. Both Burke and Wills spent their last night in Victoria at the Gummow home.

All went well with Dr. Gummow until 1872, when incorporation of the hospital under the new Charities Act was spoken of. There was a difference of opinion between board members and the doctor, with the state of affairs finally ending in a Supreme Court Action and with Doctor Gummow, versus the Committee of Management. Dr. Gurmow had refused to give up his instruments and records, claiming them as his own. A new medical officer was appointed by the hospital committee, but Dr. Gummow won the court case and was awarded damages of one hundred and fifty-six pounds ($312).

In his eleven years as doctor at the Swan Hill District Hospital, Dr. Gummow was never once absent fran his post when needed.

Following the problens with the hospital management, the Gummow family left Swan Hill in 1873 to return to Echuca, where Dr. Gurmow died at the age of forty-six years.