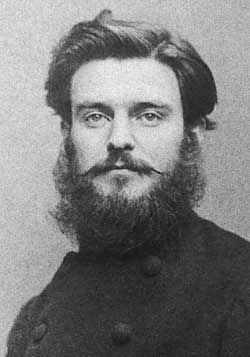 Born in Provence in France, Lucien Henry first studied with the architect Viollet-le-Duc and then under Gerome at the Ecole des Beaux Arts in Paris. During the political upheavals in France and for his involvement in the Paris commune of 1870, Henry was sentenced to death by the French courts but was reprieved and banished to New Caledonia.

After serving part of his sentence as a political prisoner, Henry was granted amnesty in 1879 and travelled to Sydney where he began teaching as art instructor at the School of Design which was part of Sydney Technical or Working Men's College which was established in 1878 by Sydney Mechanics School of Art. When the Board of Technical Education took over the College in 1883 Henry became an instructor with the Department of Art, and later became head of the department.

Henry was a founding member of the Art Society of New South Wales in 1886 and, in 1888, he arranged the New South Wales Court exhibit at the Melbourne Intercolonial Exhibition. He also exhibited and acted as a judge at Sydney's Centennial Exhibition held at the Garden Palace which he painted when it burned down in a spectacular fire.

Henry had a distinguished career as a sculptor, portraitist, landscapist, architect and designer. He designed the stained glass windows Captain Cook and Australia in the Sydney Town Hall for the centenary of New South Wales in 1888 and the magnificent chandelier in the Hotel Australia, Sydney.

The subjects of his paintings were invariably Australian landscapes and Australian flowers.

In his writings, Henry advocated the need for a national style of art and sometimes designed fanciful buildings such as a colonnaded and domed tower for Sydney's Hyde Park, based on the form of a waratah. Lucien Henry left Sydney for France in 1891 and in 1893 published The Legend of the Waratah in Paris.