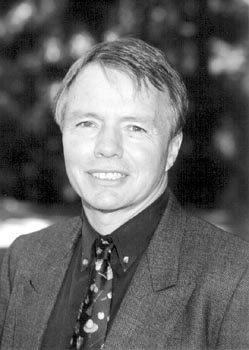 A forester by training, John has worked in national parks and wildlife management since 1974.  Canberra born and raised, he studied at the ANU and fondly recalls field excursions with Lindsay Pryor.

During the 1970s John managed the Jervis Bay Nature Reserve with the ACT Parks Service before transferring to the then Australian National Parks and Wildlife Service as the Government Conservator on Christmas Island in the Indian Ocean.

He had a decade of island conservation, looking after the nature conservation responsibilities of the ANPWS at various times in the Ashmore Islands, Coral Sea Territory reserves and Pulau Keeling, before finishing off with four years as Government Conservator on Norfolk Island.  Particular interests during this period included the breeding migrations of Christmas Island's red crabs, endangered species conservation, and invasive species management.

Source: Extracted from: Friends of the Australian National Botanic Gardens Newsletter, July 1999 No.32
Portrait Photo: as above.