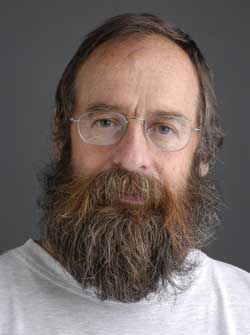 Ken was born in Armidale, NSW and grew up on Redbank farm, Guyra. As a child, his mother Nola described him as being a collector and classifier, a voracious reader and interested in plants from a young age. He attended Guyra Central School, Armidale High School and the University of New England where he was awarded a B.Sc. (Hons.), and completed his M.Sc., majoring in Geology. During his masters degree, his interest in plants led him to enrol in additional university courses to graduate level in botany.

Ken spent the majority of his botanical career at the Royal Botanic Gardens, Sydney beginning in 1983, after working previously as an Exploration Geologist in northern Australia and Sudan. His first position at the National Herbarium of New South Wales (NSW) was as a Technical Officer, working with Lawrie Johnson and Don Blaxell on the revision of the eucalypts. He was also employed to write the Flora of Australia treatment on the Gymnosperms during this period. In 1986 Ken gained a permanent position as a botanist and continued to work with Lawrie Johnson on the eucalypt revision. His work on cycads continued on from the Flora work. From mid 1997 to mid 1998 Ken was seconded to the Royal Botanic Gardens Kew, London as the Australian Botanical Liaison Officer. From 1999 to 2004, Ken held the position of Senior Research Scientist.

During his relatively short botanical career, Ken demonstrated a broad range of skills, knowledge and interests which he drew upon to achieve many exceptional things. He published extensively on the systematics, ecology and biogeography of eucalypts (most notably the bloodwoods) and cycads. He was also involved in the identification, naming, description and subsequent research on the Wollemi Pine. He became an internationally well respected botanist whose calibre, value and application of research work has spoken for itself, as evidenced by its acceptance and use by the botanical community at large. Ken played an international ambassadorial role for the Royal Botanic Gardens Sydney with his cycad work and also with his initiating and leading role in the uptake and development of bioinformatics at RBG Sydney. Combining his well developed computing skills with an impressive ability to be original and innovative, he took the lead in delivering a number of electronic products that have greatly benefited the staff of RBG Sydney as well as the botanical and general community. Most notable among these are ‘The Cycad Pages’ (which has a reputation as the most authoritative source of information on cycads), ‘NSWdata’ (the first specimen database for NSW), ‘NSW FloraOnline’, ‘EucaLink’ and ‘WattleWeb’ (now developed into ‘PlantNET’) http://plantnet.rbgsyd.nsw.gov.au/

As the last in a continuous line of resident eucalypt specialists on the staff at NSW, Ken continued the long tradition of expertise in eucalypts that was maintained for over a century. He travelled widely in Australia studying eucalypts and cycads and in latter years in the botanically very poorly known Asia/Pacific region in pursuit of Cycas. Ken’s extensive fieldwork, combined with his skill and expertise in the field, enabled the discovery of many new species, solved numerous problems of identification and nomenclature and significantly expanded our knowledge of these two groups. He was a long standing member of the IUCN/SSS Cycad Specialist Group and played a key role in many of the IUCN Red List assessments of Asian and Australian cycads. 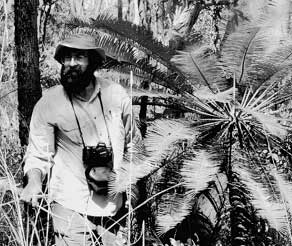 On the 13th August 2004, after twenty one years at the NSW, Ken made the difficult decision to take early retirement due to his deteriorating health. In his retirement Ken was an Honorary Research Associate at NSW and while his health still allowed, he continued to visit the Herbarium a few days a week. During these visits he assisted with the identification of eucalypts and cycads and the maintenance and development of ‘PlantNET’ and ‘NSW FloraOnline’. Despite failing health, Ken also continued some aspects of his research work, primarily on Cycas, that resulted in a number of publications. He also continued to maintain and develop ‘The Cycad Pages’ and provide advice on eucalypt and cycad taxonomy, ecology and conservation. The final goal of his cycad study project was to be a monograph of Cycas. Sadly, he did not live to see this work published.

Ken was a very practical person and had a common sense approach to work and life. He was also a quiet and modest achiever. His expert advice and broad-ranging knowledge was greatly valued and given freely to those who sought his help. This generosity continued in his retirement. He had a friendly, approachable manner and a good sense of humour. His personality, along with his generosity of knowledge, led to an active association with professional and amateur botanists, horticulturalists and collectors. He had an enquiring, critical intellect, exceptional memory and a great ability to make detailed observations, important traits for a systematist.

Ken's interests, like his abilities, were wide and varied - plants, birds, music, movies, stamps, genealogy, technology, motorcycles, things mechanical and travel. These, along with field trips to remote and out of the way places, made for a full and interesting life. Ken was a keen gardener, grower and collector of a diverse range of plants, including cycads, cacti and succulents, orchids, bromeliads, bulbs and sub-tropical plants. In his retirement, Ken planned to move to his property at Somersby, however due to declining health, his property was sold, with many of his plants donated to the Hunter Region Botanic Gardens.

Ken’s quiet, knowledgeable and easy going presence continues to be missed by his botanical family at NSW and throughout the wider botanical community. Our condolences go to his wife Lesley Greenwood, daughters Zoe Falster and Phoebe Hill, his mother Nola and brother Don.

Note: A more detailed version of this text appears on the RBG Sydney website http://www.rbgsyd.nsw.gov.au/about_us/our_people/former_staff/ken_hill