At the Adelaide Botanic Gardens where he worked for 26 years he had become a recognised authority on Australian native plants. Although he travelled extensively, it was the arid inland, and particularly the Flinders Ranges, where Ron Hill's knowledge was at its best.

From a very early age, Ron had an untiring interest in plants. He took part in many plant collecting field trips to the interior, to which his excellent photography and sketching bear witness. His 35mm slide collection numbered approximately 10,000, and many of these were published in his articles in the early editions of the SGAP's Australian Plants journal. His slides were donated to the Adelaide Botanic Gardens after his death.

Ron commenced working at the Adelaide Botanic Garden as a gardener in 1948-49 and was appointed as Assistant Nurseryman in May 1950. He was a Senior Technical Assistant at the time of his death.

When the Adelaide Botanic Gardens began the trainee course for young employees, Ron took the trainees on a weekly tour of the Gardens to discuss selected plants. Several times a year students had to undertake identification tests of approximately 40 species. He also took the trainees on excursions to the Flinders Ranges.

Among Ron's great interests, unknown to many plant enthusiasts, were music and painting. He simply loved painting and was a water colourist of considerable merit. Just before his death he held a a successful one-man exhibition at the Cricklewood Gallery, SA. He was a regular exhibitor with the Citizens's Art Group as well as being an Associate of the Royal South Australian Society of Art.

The Hills Emubush, Eremophila hillii, discovered by Ron in 1967, was named in his honour by Betsy Shaw in 1967, the protologue stating: "After Ronald Hill, 20th century horticulturalist and collector who had a particular interest in Eremophila.".

He was co-author, with Ivan Holliday, of two books:

A field guide to Australian trees (1969)
Plants of the Flinders Ranges (1975), published after his death. 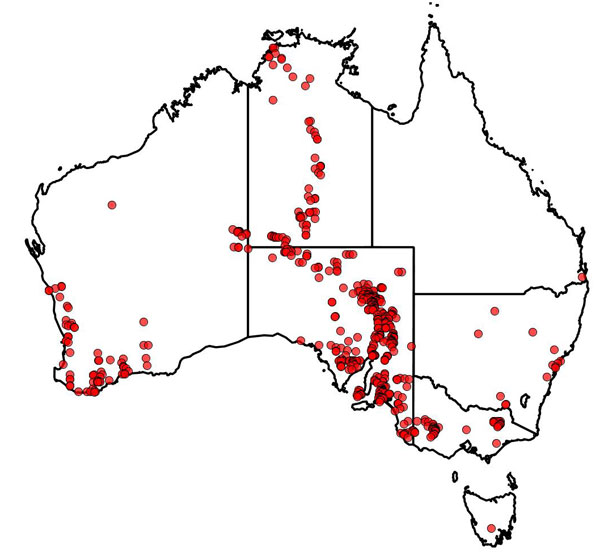