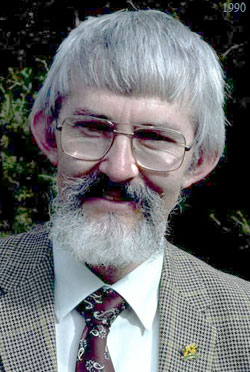 Roger Hnatiuk retired (2001) from fulltime paid employment and now works on contracts concerning vegetation and sustainable resource use as well as a range of community projects. His last permanent employment was with the Bureau of Rural Sciences (BRS) (1992 – 2001) where at the level of senior principal research scientist and as Leader Forests Program he led a national team of scientists in continuing the development the National Forest Inventory (NFI) and in establishing the Forests Section in BRS as a major contributor to the Regional Forest Agreement process in Australia. Roger oversaw the establishment, under the aegis of the NFI Steering Committee, the National Plantation Inventory and the National Farm Forest Inventory and coordinated preparation of the inaugural Australian State of Forests Report (1997) and Australia’s First Approximation Report to the Montreal Process (on sustainable forest management). His appointment as Australian representative to the Montreal Process Working Group on Criteria and Indicators’ Technical Advisory Committee recognised his high level of understanding of national and international issues of sustainable forest management.

Roger was the second Director of the Australian National Botanic Gardens (1990-1992). Before that he was Assistant Director of the Australian Biological Resources Study in charge of the Flora of Australia project and the first national program developing biological databases (the Biotaxonomic Information System). He was Vice-Chairman of the International Union of Biological Sciences (IUBS) Commission on Taxonomic Databases in the Plant Sciences. Roger coordinated the production of the third Census of Australian Vascular Plants; the first two were published by Ferdinand Mueller in 1882 and 1889. He was Continental Secretary of the Working Group on Taxonomic Databases (TDWG, 1988) in the Plant Sciences (IUBS) and served as Secretary, Special Committee on Registration (of plant names, 1987-92), International Association of Plant Taxonomists. The Association is the body that controls the International Code of Botanical Nomenclature.

Roger worked as a Research Scientist in the Herbarium of the Department of Agriculture, Western Australia where he conducted research into the species-rich shrublands of the south-west and taxonomic research on the genus Eremaea. He was Director of the Royal Society, London’s Aldabra Research Station (1973-74). His PhD is in Biogeography from the Australian National University and considered the primary productivity and microclimates of tussock grasslands on tropical high mountains and sub-Antarctic islands (1976), while his MSc (1969) is in forest ecology and vegetation of lodgepole pine (Pinus contorta) forests from the University of Alberta.

The things that Roger has found most satisfying have been those tasks which have allowed him to make it possible for other people to work together to produce major national and international activities that individuals working alone couldn’t do. He reflects that while at ANBG, his most lasting projects were his efforts to see that the Friends and Volunteers programs were established.