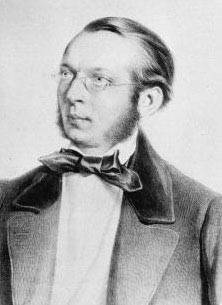 He was the son of Christian Ferdinand Hochstetter, a professor and parson, who had published works on botany and geology, and his second wife, Sophie Orth.

After taking the state examinations at the Esslingen Lyceum, Ferdinand transferred to the theological seminary at Maulbronn, and entered Tübingen University in 1847, with the aim of studying for the Lutheran ministry.

He completed his theological studies in 1851, graduated doctor of philosophy in 1852 (with a thesis in mineralogy), and gained a state scholarship to travel in Europe. In Vienna in 1853 he was recruited to the Austrian geological survey. He worked in the Bohemian forest and at Carlsbad, becoming chief geologist for Bohemia, and in 1856 was admitted as a lecturer at the university of Vienna.

In 1857 Hochstetter was appointed geologist to the scientific expedition of the Austrian naval frigate Novara. The expedition planned to circumnavigate the globe, displaying the Austrian flag, and carried eight scientists and assistants to undertake research. The Novara set out from Trieste on 30 April 1857, traversed the Atlantic to Rio de Janeiro and then to Cape Town, and sailed via Ceylon (Sri Lanka), India and the Orient to Sydney, New South Wales. Then an extended stay in New Zealand, to allow scientific examination of the North Island volcanic regions.

Hochstetter was undoubtedly the outstanding member of the Novara expedition. He received many honours from the scientific community of Europe, and a knighthood from Württemberg in 1860. The same year he was appointed professor of mineralogy and geology at the Vienna Polytechnic Institute, where he introduced new teaching practices, built up teaching collections, and led popular fieldwork expeditions. He was one of the founders of engineering geology in Europe. His promotion of a geology prepared to answer technical questions arose from his work for the governments of Turkey and Russia as a consultant to advise on the best routes for railways and the geological problems to be overcome in their construction.

To augment his meagre salary he wrote textbooks. In 1872 Hochstetter was tutor in natural science to Crown Prince Rudolf, an unusual appointment by the Catholic emperor in view of Hochstetter's Lutheran background. He served as president of the Geographical Society of Vienna from 1866 to 1882, and contributed to world exhibitions in Paris and Vienna, insisting and ensuring that New Zealand was well represented. He was a member of the Austrian Academy of Sciences and in 1876 was appointed the first intendant of the Imperial Natural History Museum. In 1881 he resigned from teaching duties. He became interested in archaeology and prehistory, and in 1884 was granted a hereditary knighthood by the Austrian emperor. He died on 18 July 1884 at Oberdöbling, near Vienna.