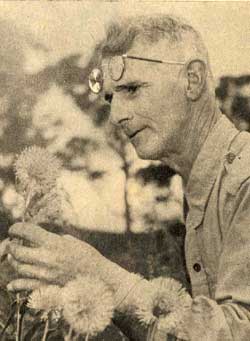 Leo Hodge was an East Gippsland naturalist and native plant hybridist based at W Tree, near the Snowy River, north of Buchan. His property was named ‘Poorinda' and all his plant cultivars bore the prefix ‘Poorinda'. Generally credited as being the first person to accomplish a thorough exploration of the Snowy River gorges, it was on one of these expeditions in 1950 that he found extensive areas of Boronia ledifolia, which was not previously recorded for Victoria, and the previously unknown Westringia cremnophila . His home garden boasted 160 native plants of which almost 100 were local species.

A self-taught hybridist without any formal qualifications, his first four ‘Poorinda' Grevillea cultivars were produced in 1952: his floruit being during the period 1952 to 1968. In all he produced more than fifty Grevillea cultivars, the most famous of these being Grevillea 'Poorinda Royal Mantle'. He also experimented with and produced cultivars from a number of other genera, including Crowea, Eriostemon, Westringia, and Prostanthera.