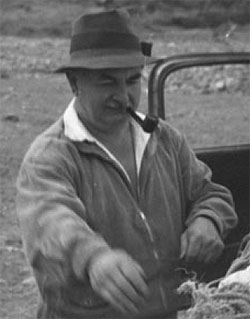 Born of German stock at Dutton, in the northeastern BarossaValley, South Australia.

After education at a local school and then at Prince Alfred College, an Adelaide independent school, he was for some years a medical student before abandoning that career path to become a school teacher. Later, however, he resumed studies at the University of Adelaide and in 1924 graduated BSc with majors in Geology and Chemistry. He took Honours in 1925 and in 1926 was awarded his MSc for a thesis on the geology of the northern Mount Lofty Ranges.

Hossfeld was then appointed assistant to Dr W. G. Woolnough, at that time Geological Advisor to the Australian Government. In this capacity heworked in Papua New Guinea,which at that time was governed by Australia. Then, from 1935 until the outbreak of the SecondWorld War, he served as a member of the Aerial, Geological, and Geophysical Survey of Northern Australia.

During the war, Hossfeld was employed by the Australian Government as an industrial chemist in Melbourne.

In 1948 he became a member of staff in the School of Geology in the University of Adelaide,initially giving evening ectures on a casual basis. At the same time he worked on his PhD thesis, a compilation of what was then known of the geology of the northern Mount Lofty Ranges, of the South East district of South Australia, and of the Northern Territory. The degree was awarded in 1952.