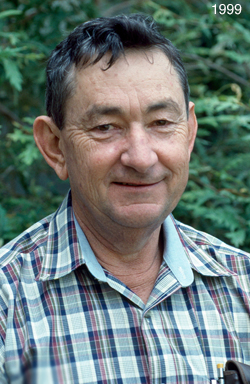 In February 2002, after a career spanning over 40 years Bernie Hyland (rain forest botanist) retired from CSIRO.

Bernie first started with the Queensland Department of Forestry in 1960, and in 1971 he moved to the Commonwealth Forest Research Institute, then to CSIRO in 1975 for the Division of Forest Research and finally in 1985 he transferred to the CSIRO Division of Plant Industry. From 1993 he has been part of the Centre for Plant Biodiversity Research (CPBR).

He was instrumental in the development of the herbarium in Atherton [QRS] which at the time of his retirement housed approx. 130,000 plant collections. These collections were incorporated into the Australian Tropical Herbarium located in Cairns, Queensland, when it opened in 2007.

He has made significant contributions to the understanding of Australia's rain forest. Bernie's major project on which he has been working for approx. 40 years is "Australian Tropical Rain Forest Plants". This is an interactive identification and information system which now covers all the trees, shrubs and vines across northern Australia’s rain forests, published on CD-ROM and includes 2154 species. Bernie’s foresight in developing this product has been recognized world-wide as an innovative contribution to botany and the distribution of information, so difficult to make accessible in other ways. The rain forest key has been an extremely successful venture and Bernie should be proud of his efforts.