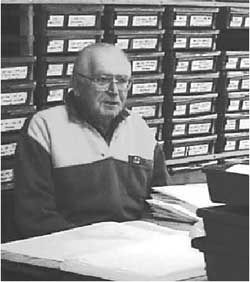 The Royal Botanic Gardens, Sydney, is to be the beneficiary of one of the largest private collections of specimens of Australian native flora ever collated. Keith Ingram compiled this extraordinary herbarium totalling some 37,000 specimens of predominantly eucalypts, native grasses and orchids over a period of 70 years. This included personal expeditions to all States and Territories, five to the Cape York region. To be named in his honour at the National Herbarium, Sydney, this collection will be used, not only as a permanent record of the nation's flora, but also by researchers.

Keith's passion for botany, and especially taxonomy, began at a very early age. His maternal grandfather, Jonathan Emms, had served his apprenticeship as a gardener at one of Britain's finest country estates, Somerleyton Hall in Suffolk, and had later (1856–60) been responsible for laying out the St Kilda Gardens in Melbourne.

Keith was raised on the Macleay River on the New South Wales Mid-North Coast where in 1930/31 he was first captain and dux of the new Kempsey High School. The award of a rare Commonwealth Scholarship at the height of the Great Depression enabled him to train at the Armidale Teachers College where he did so well (his thesis “The Flora of New England” achieved First Class Honours) that he was invited to lecture in entomology and botany. This lecturing position enabled Keith to undertake a degree in Economics at nearby University of New England.

Upon graduation in 1938 Keith married Jean Brenton, his childhood sweetheart, in a happy union that was to last 64 years. The pair moved to Sydney where Keith commenced an Arts degree at Sydney University and joined the University regiment.

After the outbreak of war Keith was posted as an Infantry Instructor to Ingleburn and Bathurst Army Camps training men destined for North Africa and European campaigns. After transferring to the 2 nd AIF Keith was posted to Townsville, thence to action in New Guinea with 1Aust CRE 6 in the Lae area. His intimate knowledge of Australian and Pacific Island timbers was so rare and valuable that both the Australian and United States Army sought and benefited from his services. Prior to Keith's involvement the effective life of timber facilities, such as wharves, bridges, barracks etc so desperately needed to support the War effort, was often measured in weeks due to termites, dry rot, and so on. Keith's involvement in the New Guinea Campaign is documented in articles by him (Ingram 1993) and K. Howard (1994).

Until two weeks before his death on 16 th April 2002 in Hawkesbury Hospital, Windsor, Keith was busy in his herbarium at Richmond naming plants sent to him by students, fellow botanists, enthusiasts and Councils from all over the country. His philanthropy, like his botanical knowledge, knew no barriers. In 2000 Keith was awarded an OAM for his lifelong services to Botany. Recently the Federal Government published a list of rare and endangered species of native flora. Three of these were named in Keith's honour. One, Acacia ingramii, adorned his casket, presented by grateful staff of the Royal Botanic Gardens, Sydney.

Keith's love of the native environment encouraged him to undertake meticulous research over many years of areas within New South Wales that he considered of special significance. As a direct result of his personal endeavours and quiet lobbying behind the scenes, the Munghorn Nature Reserve (Upper Hunter), Winburndale Nature Reserve (near Bathurst) and the Hat Head National Park (Crescent Head to Smokey Cape on the Mid north Coast) have been protected for future generations to enjoy.

Keith's professional career was in the state Education Department in which he served for 40 years. The war had delayed the conferring of his Arts degree until 1946. In 1946–1948 he taught at all Sydney “Demonstration” schools, 1949–53 at Mudgee High. Then in 1954 he became Principal of the new, but incomplete, Monaro High at Cooma. Keith always considered this a most challenging assignment, there being 27 nationalities represented in a school of almost 300 students. His efforts there were rewarded with further promotion as District Inspector, Central West at Forbes (1955–57), Western Area Secondary Inspector, Bathurst (1958–63) and thence to senior staff and administrative positions in head office, Sydney, until retirement in 1973.

At his investiture at Government House Keith was asked by the then Governor, Gordon Samuels, why his passion for botany. To this he replied, "In the 19th Century there were few botanists and few gentlemen. Now there are even fewer botanists and no gentlemen!"

Those fortunate to know Keith during his long and productive life will endorse these sentiments. Ever the friend and mentor, a man of rare intellect and botanical knowledge.

Keith is survived by his wife Jean and their three children, Anne, Ross and John.