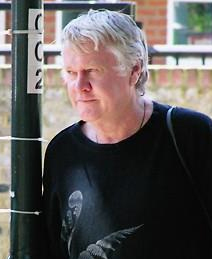 Bob graduated from the University of Auckland in 1966 with a B.Sc. and in 1968 with an M.Sc. He first came to Papua New Guinea in 1968 as a Research Assistant for the Department of Geography, Australian  National  University (ANU) to manage their field station on Mt Wilhelm. He joined the PNG National Herbarium in 1969. In 1971 Bob took up a lecturing position at the PNG Forestry College, Bulolo to teach botany, dendrology and forest ecology before moving to the PNG University of Technology (UNITECH) in 1979 as Senior Lecturer. He was Head of Department from 1987 until 1990 when he moved to the Royal Botanic Gardens, Kew to take up the position of Curator for Ferns and Gymnosperms. He retired from Kew in 2004 but continued as a Research Fellow, which allowed him to continue his work on the ecology of the flora from both Papua New Guinea and Indonesian New Guinea (Papua), with particular emphasis on the ferns. In addition to Kew, Bob continued to be a familiar face at herbaria in Leiden, Lae and Bogor. He was an active participant of the Flora Malesiana Project, attending all of their symposia, which commenced in 1989. His contributions to the floristics and ecology of the vascular flora of Malesia will be recognised posthumously at the 11th International Flora Malesiana symposium in Brunei in June.

Bob published extensively on the botany and ecology of both Papua New Guinea and West Papua and his work can be found in journals and books. One of his early publications, Common Forest Trees of Papua New Guinea, is still used as a major teaching resource at both Bulolo and Lae campuses. He taught many of PNG's foresters and set very high standards in his courses. For example the pass mark for Dendrology was 85%, a requirement met by nearly all graduating students. He was also an excellent organiser, securing NZ Government funding to build the library at the Bulolo Forestry campus as well as European Union funding to build the forest herbarium at the Taraka campus.

Although working in London from 1990, Bob continued to mentor many Papua New Guineans foresters and botanists from both UNITECH and the University of PNG over the years, providing encouragement and support as they continued their studies for a higher degree. His heart always belonged to Papua New Guinea.

Words by Barry Conn and others