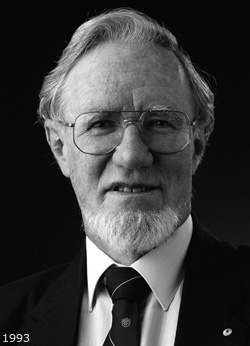 L.A.S. (Lawrie) Johnson (1925-1997) was an Australian taxonomic botanist notable for his studies of the eucalypts (Eucalyptus, Angophora and Corymbia), cycads, Juncaceae, Oleaceae, Restionaceae and phylogenetic studies of Myrtaceae, Myrtales and Proteaceae. His career was at the Royal Botanic Gardens Sydney, as Botanist (1948-72), Director (1972-85) and Honorary Research Associate (1986-97). During his directorship the Royal Botanic Gardens saw major developments of satellite gardens, education programmes and broadening of the scientific programmes. Alone or with colleagues, he distinguished and described four new plant families and many genera and species, as well as reclassifying further taxa. He contributed to the theory of systematics, especially by a comprehensive critique of the philosophy of extreme empiricism advocated by the early numerical taxonomists. The hypotheses of relationships developed through his phylogenetic studies have served as starting points for much further investigation by others using new approaches, especially through DNA sequencing.

Lawrie Johnson was a taxonomic botanist notable for the outstanding breadth of his interests and expertise, the rigour of his scientific approach, and the intensity with which he defended scientific conclusions and opinions. His major contributions came through broad synthesis so that systematic studies were integrated with evolutionary and ecological considerations. In a field often characterized by solitary workers, his investigations mostly involved colleagues, and he encouraged them to share his wide-ranging outlook while he also relied on their efforts. With colleagues he tackled many large plant groups, often delimiting taxa and resolving questions of relationships far beyond the extent that could be published in his lifetime: jointly authored publications continued to appear for some years after his death, since Ken Hill, Karen Wilson and Barbara Briggs acknowledged that he had a substantial role in work still being finalized by all of them.

Johnson's achievements were recognized by many awards, to an extent remarkable fora scientist in the field of systematic botany and attached to one institution, the Royal Botanic Gardens Sydney, for the whole of his professional career, as Botanist (1948-72), Director (1972-85) and Honorary Research Associate (1986-97).

Since Johnson was well known for his strongly held views, passionately expressed, it was in character that, when he knew that he was terminally ill, he prepared the statement to be read at his funeral (part of which is reproduced below). It sums up much of his life, with characteristic messages for those who heard it:

"I have never been inclined to follow convention, and therefore will not be silent even at my own funeral. The first thing I have to say is in all sincerity to express my thanks for many opportunities to lead a satisfying life which, though not as long as I would have hoped, has been long enough for me to feel very fairly treated. These opportunities began with my deeply respected and loved parents, Sid and Emily Johnson, and my two sisters Valerie and Nancy. Teachers, especially my science teachers at school, Mr Clark and Mr Roberts, enabled me to perceive clearly in adolescence the absurdity of all forms of superstition and fanciful belief. They were followed at the University of Sydney by some outstanding teachers at that level, especially Eric Ashby (later Lord Ashby) and Sir Rutherford Robertson. These men showed me that botany was indeed a science, and I abandoned my first love, chemistry, to follow botany, although in a field very different from those of Ashby and Rutherford [Robertson]."